Getty Wendell Carter grew up around basketball, but is ready for his own moment in the spotlight.

And for good reason. After all, both of his parents were standouts in the sport and after years watching his mom and dad succeed, Carter is ready for his own moment in the hoops spotlight. The Blue Devils freshman standout has been a big-time spark down low for his squad all season and, now, he’s hoping to notch a national championship and add on to that family legacy.

Here’s everything you need to know about Carter, his hoops history and the parents who have supported him every step of the way: 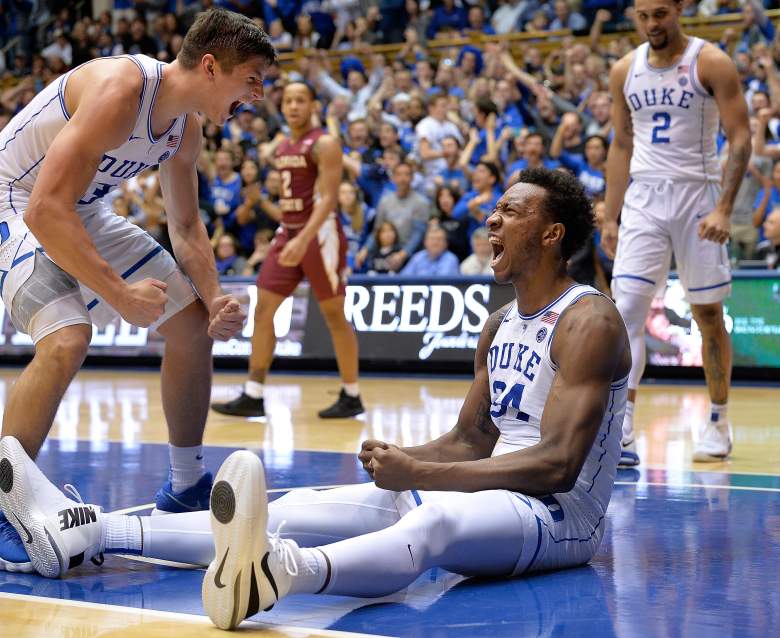 ‌Carter grew up with one goal in mind – playing professional basketball. And he had the perfect idol at home, his father. The elder Carter played his college basketball at Pearl River Junior College and Delta State before competing professionally in the Dominican Republic.

“He would watch me and he would see me running up and down the floor and he would try to do the same thing,” Carter Sr. told the News & Observer. “So that was kind of cute.”

Carter started playing basketball when he was just six years old, but his father said he knew he had a future on the hardwood when he transferred to Pace Academy as a sophomore and saw an immediate improvement in his game.

“We’re very proud,” Carter Sr. said. “I really never thought this would happened. It just kind of crept up on us. He’s grown into his own trying to make his own decisions and be a man about what he does.”

The elder Carter was incredibly involved in his son’s recruitment, taking official visits and, in the end, helping choose Duke over Harvard, Georgia Tech and Georgia.

2. His Mother Played Basketball at the University of Mississippi

I spoke with Wendell Carter Jr.’s mom at halftime to get her perception of what happened with the #URI fans. #MarchMadness #NCAATournament #URIvsDuke #ABC11 *warning some explicit language* pic.twitter.com/oTE8aIhb3i

It wasn’t only the Carter men who found success on the court.

Carter’s mother, Kylia, played college basketball at the University of Mississippi. She went on to stay at the school and, per her Linkedin profile, served as a counselor and coordinator for minority affairs from 1991 to 1994. Kylia also worked as a youth basketball trainer and, for the last 18 years, has worked as a system analyst for International Aviation Consultants.

Kylia made headlines during this year’s NCAA Tournament when, during Duke’s second-round matchup against Rhode Island, she was heckled by several Rams fans. According to Kylia the fan cursed at her after she was upset with a foul call on Duke’s Marvin Bagley III.

Wendell Carter Jr.’s mom looks to be in better spirits at halftime after an incident with #URI fans earlier in the game. #ABC11 pic.twitter.com/WPGoj66vFs

She, eventually, moved seats and told a reporter at the game:

Two Rhode Island guys, they were older. One guy had on a wedding band. The guys in front of him tapped him and said ‘Man you shouldn’t have done that.’ They heard them too. That’s when security… That’s when I got a little irate because I thought it was ugly. So I told them it was ugly. I said ‘You shouldn’t talk to me like that I’m talking to you at all.’ He said ‘Shut up. Shut up. Shut up. Get over there Duke fan.’ That’s when security came and escorted them out. There had been a problem already earlier in the game.

Duke went on to win the game handily, booking its trip to the Sweet 16 and giving Kylia something to cheer about.

3. Carter’s Parents Met During College & Have Been Married for Almost 30 Years 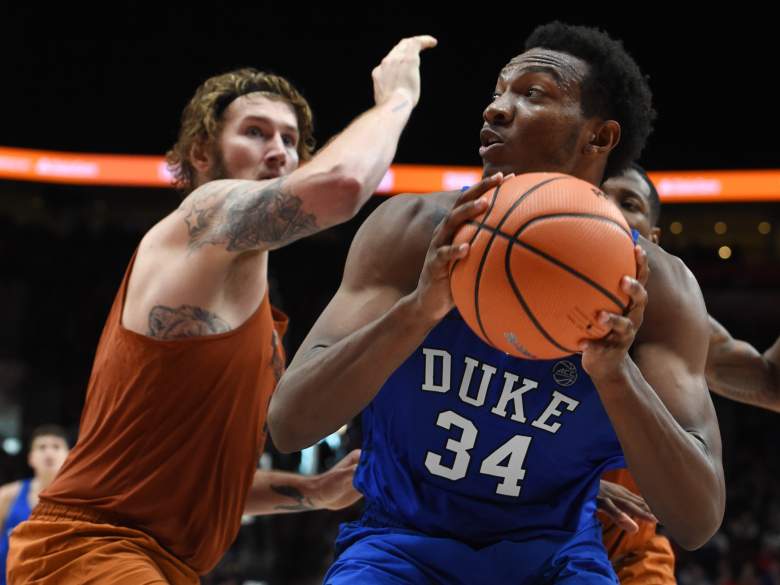 Carter’s parents first met in the early 90’s when Wendell was in the process of transferring to Delta State University. He was living just off-campus and knew Kylia’s sister through mutual friends and the pair crossed paths while they were both watching a game at the nearby Clark Atlanta University.

“I thought he was cute, to be honest,” Kylia told CBS Sports. “But, you know: Any excuse to go watch basketball.”

At halftime, Wendell signed up for a slam-dunk contest, looking to showcase his skills and, maybe, get the attention of the girl he’d just met. He did – and in grand fashion. Wendell slammed down a windmill dunk, the crowd went wild and he won a trophy.

He gave the trophy to Kylia.

“That’s exactly how it happened,” Kylia said. “He won my heart.”

And, twenty-six years later, the trophy still sits on the piano at the family’s home in Atlanta.

4. His Parents Made Sure School Came Before Basketball

Carter first played basketball for a church league in Atlanta and it didn’t take long before it was clear he was heads and shoulders above his teammates – quite literally. In fact, Carter was so tall that he started playing against older kids to make sure things were fair.

Despite his clear talent, however, Carter’s parents did their best to make sure that he was focused on things outside of basketball, namely his school work. Kylia explained the house rules to The Undefeated:

We made this little rule: We told him he had to have A’s in order to play. And he made all A’s, all the time. And we just kept pushing him academically and putting him in the right academic environment. He started making a few B’s, but that’s OK too. I guess there was a little ridicule at first because it’s not necessary. You don’t have to have an A to be a good student. But we told him, ‘You’re a boy and you’re black, an A is necessary.’

The plan worked out well. Carter led Pace Academy to a 26-8 record and a 2017 Georgia Class 3A state title, averaging  22.7 points, 15.5 rebounds and 5.8 blocks as a senior. He was named the 2017 Georgia Gatorade Player of the Year and played in the McDonald’s All-American Game, the Hoop Summit and Friday night’s Jordan Brand Classic.

Carter signed his national letter of intent to play for Duke in November 2016, but Kylia had hoped for a different decision. The family strongly considered Harvard for its academics, but Carter said he decided on Duke because it was a “win-win” with athletics and education, plus “one of the best coaches.”

5. Carter Said His Tattoos Help Remind Him of His Family 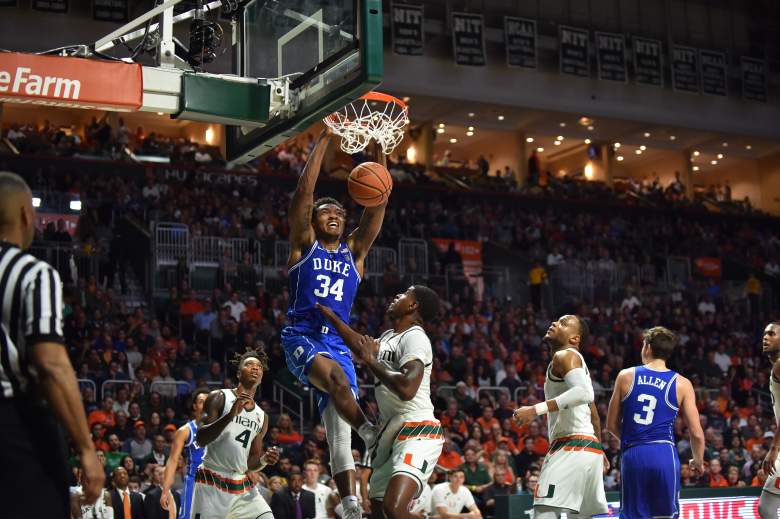 ‌Carter has drawn headlines and questions about his tattoos all season. He has a few – visible every time he suits up for a Duke game – and each one has a very particular story.

The Blue Devils star was in New Zealand in 2017 when he met a local artist and the two started swapping stories, discussing life and lessons and Carter told him about his very first idea for a tattoo – a pair of wings with a cross and the word “Blessed” inscribed in the middle. The artist drew it, perfectly, and Carter knew that he had to turn the art into ink.

His mother went with him when he did. And it all grew from there.

Carter told ESPN the cross represents his father, the words “Blessed” his outlook on life, while the rings that hang from the cross are his family and, most importantly, the wings a sign of the career that’s about to take off.

In addition to the wings, Carter also has the words “Fear” and “None” on the inside of his biceps, a tribute he said he got “from my dad” and a mindset that, he’s hoping, will lead to success on and off the hardwood.