WWE Fastlane Kickoff: March 11, 2018Get all the late-breaking news and expert analysis along with kickoff matches all before the action goes down on the final stop along the Road to WrestleMania at WWE Fastlane! More ACTION on WWE NETWORK : wwenetwork.com Subscribe to WWE on YouTube: bit.ly/1i64OdT Must-See WWE videos on YouTube: youtube.com/playlist?list=PLqIVmFaHA8BoBQx9qX1C6vCwhybDLjC52 Visit WWE.com: bit.ly/visitwwe2018-03-12T00:08:11.000Z

At first, he was set to defend the WWE Championship in a Triple Threat Match. Then two more men made their way into the bout and turned it into a five-man contest. After all of that was confirmed, one final entrant made his way into the match and finally turned that bout into a Six-Pack Challenge. So now the Fastlane 2018 main event has been set in stone – it’ll be WWE Champion AJ Styles vs. John Cena vs. Kevin Owens vs. Sami Zayn vs. Baron Corbin vs. Dolph Ziggler. Besides that major match is a United States Championship bout between Bobby Roode and Randy Orton, a SD Live Women’s Championship match pitting Charlotte against Ruby Riott, and the next legendary meeting between The Usos and The New Day.

You’ve come to the right place for full coverage of Fastlane 2018, so stay right here to stay up to date on all the event’s major happenings. 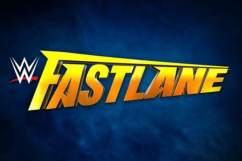 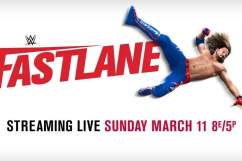 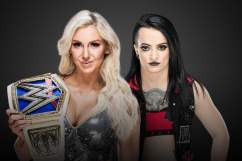 Highlights: Breeze and Gable were the first men up. Gable easily manhandled Breeze, which led to Fandango entering the ring with some amateur wrestling gear in tow. Gable took him out of the game pretty fast too and forced Fandango to tag Breeze back in. Gable got on all four’s and challenged Breeze to take him down. Breeze chose to sit on Gable’s back and ride him like a horse instead, which led to Gable getting enraged and running right into a dropkick from Breeze. Breeze and his partners all entered the ring afterwards and managed to force their opposition to the outside. Once the match got back under control, Gable flipped Breeze out of the corner and forced him to slam his face right into the mat. Breeze then ended up getting assaulted by the opposition as his teammates looked on. Mojo got in a few good strikes on Breeze, but a moment of slight distraction led to Mojo catching an Enzuguri. Breeze fought hard to get the hot tag to Dillinger, who landed all of his signature comeback moves on whoever got in his way. Dillinger almost got caught with a double team move from Gable and Benjamin, but a last minute dodge saved him. Gable came off the top rope wand was met with a Spinning Wheel Kick from Breeze. Dillinger made sure to secure the win for his team by using his two finishing maneuvers on Mojo.

Becky Lynch and Naomi vs. Natalya and Carmella

Highlights: Lynch and Carmella got into an early shoving exchange while they faced each other first. Lynch almost locked in a submission on Carmella, but she crawled over the the ropes and forced the ref to break the hold. Carmella tagged Natalya in, who took down Lynch with a suplex. Natalya looked good for a while until she found herself on the receiving end of a double team maneuver from Lynch and Naomi. Naomi stayed in control of the match with her repertoire of high-flying offense and almost landed her Split-Legged Moonsault. Carmella’s quick thinking caused her distract Naomi, which led to Naomi kicking Carmella off the ring apron but then finding herself taken off the top rope with a Sitdown Powerbomb from Natalya. Afterwards, Carmella and Naomi broke down Naomi with their best moves and plenty of verbal assaults.

Naomi took a ton of punishment, but she soon escaped her rivals’ corner and got the hot tag to Lynch. Lynch came in like a house of fire and used her numerous suplexes and top rope maneuvers to take down Carmella and Natalya. Lynch and Naomi used heir teamwork afterwards to land a kick that got followed up by a top rope leg drop on Carmella. The match got even wilder when Carmella took Lynch off the top rope with a slick Hurricanrana. Natalya almost handed Carmella’s MITB briefcase over to her, but Lynch cut her off by elbowing her off the ring apron. This brief moment of distraction led to Lynch’s downfall as she turned right around to a lethal Superkick from Carmella.

Highlights: Aiden gave the crowd another original tune that lambasted their home state, but they came to appreciate it once the words “RUSEV DAY!” left his lips. Once the match began, Rusev powered down Nakamura and kept him stuck within his grasp at first. Both men came off the ropes and traded counters, but Nakamura soon got the upper hand with his swift maneuvering. Rusev’s temper caused him to get a bit stiffer and get even rougher with his foe. But Nakamura slipped out of Rusev’s grasp and then proceeded to taunt him. Rusev decided to leave the ring and take a breather while the crowd booed his cowardly efforts. Nakamura had had enough of his antics, ran outside to grab him, and landed two nasty knee strikes on Rusev on the ring apron. While Nakamura played to the crowd and tried to re-enter the ring, Rusev struck down Nakamura and then slammed him repeatedly into the crowd barrier. Once back in the ring, Rusev took control of “The Artist.”

Rusev’s use of slams and strikes rocked Nakamura for a while, but an escape from a submission forced Nakamura to enter into his second stride of offense. Nakamura pulled off most of his comeback maneuvers on the big man and then locked him into a Guillotine submission. Rusev made several attempts to power out of his hold, but failed. Instead of escaping, Rusev simply picked up Nakamura and threw him off with a Fallaway Slam. Nakamura got back to his feet and landed a combination of strikes, but Rusev put him back down afterwards with two lethal kicks. Both men started clocking each other with stiff strikes, but Nakamura ended up winning that mid-match war. Nakamura almost found himself locked into The Accolade, but he slipped out of it and landed one of his signature kicks on Rusev. While running at Rusev with his finishing move being signaled for, Nakamura found himself rocked by a sick Superkick. Rusev tried to follow that move up by locking in his signature submission hold, but Nakamura escaped once more and landed a Kinshasa. While Rusev tried hard to get back to his feet, Nakamura nailed Rusev with another debilitating Kinshasa.

Highlights: As soon as the match began, both women made early attempts at landing their finisher. Those attempts yielded nothing but negative results, which led to Charlotte switching gears and landing a Fallaway Slam. Ruby was placed on the top rope, but she jumped right on Charlotte’s back and tried to put her to sleep. Charlotte forced Ruby off her back by launching herself onto the ring apron with Ruby still tied to her. While both women got back to their feet, Ruby’s stablemates showed up to distract Charlotte. Their tactics worked and aided Ruby as she kicked Charlotte in the back of the head. Liv Morgan and Sarah Logan then circled around the champ like vultures, but suddenly Naomi and Becky Lynch ran out to even the odds. Back in the ring, Ruby landed her Riott Kick but was still unable to unseat the champion. Ruby reached into her bag of top rope splashes and submissions to do more severe damage to Charlotte while the women on the outside looked on.

Ruby remained in control for a while until she ate a suplex that forced her right into the ring corner. Charlotte tried landing a Moonsault right after, but Ruby shoved her right off the top rope and into the ringside barrier. Things look dire for the champ, but she managed to show resolve by catching Ruby in midair and using a Fallaway Slam to fling Ruby into the crowd barrier. Charlotte followed that up by landing a Moonsault off the top of the barrier onto an unsuspecting Ruby. Once both women crawled back into the ring, Charlotte began her comeback. It got cut off pretty early though as Ruby used a top rope Frankensteiner to rock the champ. Ruby then used Charlotte’s own chops to disrespect her, but it did nothing but wake her up and force her to respond with some offense of her own. Ruby ended up flooring Charlotte at one point and forcing her partners to taunt Lynch and Naomi. The in-ring official had grown tired of all the outside mayhem and chose to throw Lynch, Naomi, and the rest of the Riott Squad out. Ruby found herself getting beaten to the punch on every exchange once Charlotte got her hands on her again. Charlotte tore into Ruby with a nasty Spear and then forced her to tap out with her patented Figure Eight Leg Lock.

As Charlotte celebrated in the middle of the ring, Asuka suddenly made her entrance! She entered the ring and made it clear that her chosen opponent for ‘Mania 34 was the SD Live Women’s Champion, Charlotte.