The Mercedes-Benz Superdome played host to one of the greatest WrestleMania’s in recent memory.

Here’s hoping that it meets the high standards established by ‘Mania 30. Check out my matchup predictions for the next installment of “The Greatest Spectacle in Sports Entertainment.”

Predictions & Winner: I was really hoping to see Roderick Strong and Buddy Murphy make it the finals. It’s a brand new, fresh matchup. And I know they’d be able to put on a hot performance for the New Orleans faithful. Even though that won’t happen now, I’m still satisfied with the two men who are now planned to fight for the Cruiserweight Championship.

Cedric Alexander and Mustafa Ali are two of the better wrestlers on 205 Live – they regularly put on good to amazing matches with anyone they’re pitted against. And now that we know that they’ll be taking on each other in a high stakes ‘Mania bout, we should expect one of the best matches of the night right here. Hopefully, they get 10-minutes to do their thing. I’m placing all my bets into the pot of Alexander. I think he was next up as champion during his feud with Enzo Amore. It’s finally time for him claim the title that’s been alluding him for too long.

Cesaro and Sheamus (c) vs. Braun Strowman and a Partner of His Choosing (WWE Raw Tag Team Championship)

Predictions & Winners: I really wanted to see Braun Strowman waltz on down to New Orleans, break “The Bar,” and become the first man in WWE to become a solo tag team champion. Kurt Angle prevented that from happening by announcing that Strowman would need a partner for his tag team title shot.

Now who’s someone that hasn’t been decimated by Strowman and would fight alongside him? I’m betting my life savings and future child’s college tuition on one man filling that spot – NXT’s resident monster, Lars Sullivan! Strowman and Sullivan will steamroll over Cesaro and Sheamus and leave ‘Mania 34 with the red tag straps in hand. MONSTERS REIGN SUPREME! *begins Strowman roar*

Predictions & Winners: Right when The Usos and The New Day were on the verge of giving us another tag team classic, Harper and Rowan came out to interrupt things. The Bludgeon Brothers truly made their dominating presence felt by laying waste to both teams. After months of winning far too easy squash matches, the biggest (in stature) tag team on SD Live have finally gotten themselves a tag team championship opportunity.

Making a prediction on who’ll get the titles here is tough. I’m a huge fan of all three duos and I’d have no issue seeing either of them get the winning pin. But Harper and Rowan have been built up as unbeatable threats for a good while now, which is why they’re now established enough to even be in this match. The Usos have held the tag team titles long enough, plus The New Day don’t really need to run with those tag team belts again. I’m giving the Bludgeon Brothers the win here. It’s time for a new team to rule the SD Live tag team division. Harper and Rowan are certainly the ones to do it.

Predictions & Winners: It’s so fitting to see the man who stood tall at the end of the last ‘Mania in New Orleans make his in-ring return for ‘Mania 34. Daniel Bryan finally got the OK to get back into the ring and compete. I had a sneaking suspicion that they were building up to him getting back to competing these past few months. His squabbles with Shane McMahon over the handling of Kevin Owens and Sami Zayn made me think Bryan would be taking on a heel version of Shane. But after Shane and Bryan both got demolished by the Canadian heels, it made more sense for SD Live’s bosses to team up.

Relive the rivalry between Daniel Bryan & Shane McMahon and Kevin Owens & Sami ZaynBefore their grudge match at WrestleMania, see how the bad blood between these four men escalated to this point. Get your first month of WWE Network for FREE: wwenetwork.com Subscribe to WWE on YouTube: bit.ly/1i64OdT Visit WWE.com: goo.gl/akf0J4 Must-See WWE videos on YouTube: goo.gl/QmhBof2018-04-08T00:29:45.000Z

Bryan issued the tag team challenge against Owens and Zayn. And to no one’s surprise, they’ve accepted it. The stipulations tied to this bout’s outcome are pretty heavy – should Owens and Zayn win, they’ll become active members of the WWE roster again. But if they end up losing, they’ll remain “unemployed.” It’s crazy to think that Bryan would lose in his very first comeback match, but I just can’t imagine WWE keeping Owens and Zayn fake fired for much longer. Shane’s bad luck at ‘Mania will continue here as he’ll be the one getting pinned by either Owens and Zayn. Both men are getting their jobs back once this bout comes to a close.

Predictions & Winner: So glad WWE took their red marker and crossed out The Fabulous Moolah’s name off of this. Just look her up if you want a good idea of why that is. Anyways, it’s time to make some history with the ladies of WWE once again! Women from the Raw, SD Live, and NXT brands will do battle and try to claim that weird looking trophy (it totally looks a woman’s inner lady parts, right? Or is it just me?). A lot of the usual suspects have been announced as entrants for this bout. As for the NXT participants, I’m thinking Billie Kay, Peyton Royce, and Taynara Conti will represent NXT. The first two are long overdue for a main roster callup, which is why I think they’ll make their debut here. As for Conti, she’ll play the part of an extra body that’s just there to give NXT an extra bit of representation.

Bayley gets payback against Sasha Banks: Raw, April 2, 2018After Sasha Banks helped Bayley fight off Absolution, The Huggable One tried to get even with The Boss. Get your first month of WWE Network for FREE: wwenetwork.com Subscribe to WWE on YouTube: bit.ly/1i64OdT Visit WWE.com: goo.gl/akf0J4 Must-See WWE videos on YouTube: goo.gl/QmhBof2018-04-03T02:22:24.000Z

So of course there’s going to be a few more women entered into this bout. Like the Women’s Royal Rumble that happened earlier this year, I can see a few old timers hopping into the fray too. The main storyline that adds a little bit of weight to this bout is the beef between former best friends Sasha Banks and Bayley. Ever since Banks screwed over Bayley at Elimination Chamber, Bayley’s tapped into her killer instinct and gone to war with Mrs. Banks. I’m envisioning a moment where Bayley gets rid of Banks, which leads to a pissed off “Boss” getting her revenge by forcing Bayley to get eliminated (THEIR FEUD MUST CONTINUE!). So who’s going to be the winner? I’m placing my bets on Peyton Royce. She seems to be the more over of the two in her “Iconic Duo.” She’ll get the surprise win and a huge push on whatever main brand she chooses to go *fingers crossed for SD Live*. 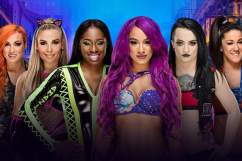 Predictions & Winners: If Dwayne “The Rock” Johnson had a clear schedule during the buildup to ‘Mania 34, I think he’d be the one tagging alongside Ronda Rousey for this bout. At least we’re getting the next best option as her partner in Kurt Angle! Two legit amateur athletes who’ve performed at a high level in their chosen arena’s should work well as tag partners. Triple H and Stephanie McMahon have had it out for Rousey ever since they got her to officially sign on WWE.

Kurt Angle & Ronda Rousey take on Triple H & Stephanie McMahon at WrestleMania"Rowdy" Ronda Rousey makes her long-awaited WWE in-ring debut when she teams up with Kurt Angle against Triple H & Stephanie McMahon at The Showcase of the Immortals on the award-winning WWE Network. Get your first month of WWE Network for FREE: wwenetwork.com Subscribe to WWE on YouTube: bit.ly/1i64OdT Visit WWE.com: goo.gl/akf0J4 Must-See WWE videos…2018-04-07T22:29:49.000Z

Behind closed doors, Rousey’s been busy getting in in-ring shape at the Performance Center. Her true love of the business and dedication to training gives me hope that she’ll do well once the bell rings for this bout. Angle and HHH will be the ones carrying most of the weight for this matchup. Steph will take her little cheap shots at Ronda when the chance arrises, of course. But once Angle and HHH find themselves laid out, Steph will have no choice but to take Rousey head on. And that’s when she’ll quickly throw on that famous armbar of her’s and cause Steph to tap out in just a few seconds. Angle and Rousey will stand tall over WWE’s wrestling execs at the end of this battle.

Predictions & Winner: I KNEW IT! Didn’t I tell you guys it was obvious that Asuka was going to hop over to SD Live and challenge Charlotte? I figured WWE wouldn’t pit Asuka against Alexa Bliss again since they gave it away on free TV already. Asuka’s already beaten her, so it wouldn’t be all that interesting to watch them lock up again at ‘Mania. It’s way smarter to go the Dream Match route with Asuka vs. Charlotte. The undefeated Asuka has been built up as an unstoppable force, while Charlotte has clawed her way to the top to reign as the Blue Brand’s undisputed queen.

Charlotte Flair puts her championship on the line against Asuka's undefeated streak at WrestleManiaFind out if Charlotte Flair will hand Asuka her very first defeat in WWE or if The Empress of Tomorrow will end The Queen's title reign to become SmackDown Women's Champion on The Grandest Stage of Them All, WrestleMania, streaming live on WWE Network at a special start time of 7 ET/4 PT on Sunday.…2018-04-07T23:29:48.000Z

Those story threads add a lot of extra heat to this first-time meeting. This matchup better get a long runtime – both women are capable of wrestling the best match on any card and I want them to do just that on the ‘Mania stage. Asuka’s clearly going to walk away with the title here. WWE has invested a lot in Asuka by making her the first ever winner of the Women’s Royal Rumble. They’d be crazy to have her lose after being bestowed with such a historic distinction. Which means Charlotte’s reign as SD Women’s Championship will come to an end via an Asuka Lock.