Just months after going public with their relationship, Tinashe and Ben Simmons appear to no longer be dating. Through a series of interviews and social media posts, the couple had previously let the world know they were an item.

Tinashe was born in Lexington, Kentucky, but her family moved given the racial tension in the area. According to Complex, her father, Michael, was born in Zimbabwe, and later immigrated to the United States. Tanashe’s mother, Aimie, is from Iowa and is of Norwegian, Danish, and Irish descent. Her parents met at the University of Iowa, and both eventually went on to become professors. Michael teaches acting at California State Polytechnic University, Pomona, while Aimie teaches physical therapy at California State University, Northridge.

Tinashe explained to Complex that she views her music as a way to tell stories.

“I’ve always been able to tap into the storytelling aspect of writing,” Tinashe explained Complex. “As an artist you’re allowed to create stories that aren’t so literal to your life. I’m able to take stories that my friends have gone through, things I’ve witnessed, secondhand accounts, and narrate that.”

According to Page Six, Simmons has now been linked to reality star Kendall Jenner.

Learn more about Tinashe and her relationship with Simmons.

1. The Couple Was Introduced in Los Angeles & Went Out to Dinner for Their First Date

Tinashe spoke about her relationship with Simmons in an interview with Hot 97. She noted the couple decided to go public with their relationship given all the rumors about their status. She explained in the April 2018 interview that she had been dating Simmons for about six months, and was introduced to him through a mutual contact.

“It’s super new for me,” Tinashe told Hot 97. “Defintely weird, not used to it. Kind of makes me nervous, but yeah it’s fun, it’s exciting. I feel like people were already talking so it’s like you can either try to hide it and be like no, no nothing’s happening. Or you can just be upfront with it. Like I was going to all his games, and people would see me there.”

Rumors of Simmons and Tinashe dating heated up after the Sixers star responded to Tinashe’s Instagram post. Tinashe posted a photo of herself with the question, “Where’s bae?” Simmons responded to the question by posting “Charlotte” in the comments.

Since the Instagram exchange, the couple has been less subtle about their relationship. Tinashe has spoken about Simmons in several interviews. Additionally, Tinashe and Simmons have been posting photos of themselves together on social media.

3. The Couple Was Photographed While Taking a Shoe Art Class Together

When you combine a famous singer and basketball player, people take notice as the above photo shows. The couple was photographed taking a shoe decorating class together. Simmons is passionate about shoes, and the team-issued kicks at LSU were not good enough for Simmons. Sports Illustrated detailed Simmons shoe collection during his LSU days, which has surely grown after his first NBA contract.

Julie [Ben Simmons mother] is no Grinch. It’s just that the family had to draw a line after allowing Ben, who would not be caught dead playing in LSU’s team-issued Nikes, to spend ‘an exorbitant amount of money on custom shoes,’ according to Emily. Ben’s nine pairs of LeBron XIIIs, seven of them custom-designed on Nike.com, cost more than $2,000. Over his first 12 games at LSU he took the court in nine different styles. He has since given away a white pair he blamed for a loss (at Charleston on Nov. 30). The purple-with-white-bottoms pair he wore while scoring 43 points against North Florida on Dec. 2 is one of his favorites.

According to Sports Illustrated, Simmons signed a $7.5 million contract with Nike prior to the NBA draft.

Tinashe Gets Googly Eyed While Admitting Ben Simmons Is Her Favorite 76er PlayerTinashe stopped by Paris Nicole’s show on Valentine’s Day to talk about her new single with Offset, “No Drama” and her new album coming soon.2018-02-15T22:05:25.000Z

Tinashe did an interview on a Philadelphia radio station on Valentine’s Day back when her relationship with Simmons was in the beginning stages. Tinashe played it coy when asked about her Valentine’s Day plans. She did admit her favorite Sixers player was Ben Simmons, and she planned on continuing to attend Sixers games.

Since then, the couple has been open about their relationship. Simmons posted several photos of the two of them together on Instagram.

“This is a dime I can’t pass,” Simmons noted in one caption.

5. Tinashe Appeared in the Christmas Movie The Polar Express

As a child, Tinashe played Carrie Baker in the animated Christmas movie The Polar Express. Tinashe appeared in movies prior to starting her music career. With the release of Joyride, Tinashe now has three studio released albums. April 2018 was a big month for both Tinashe and Simmons. Tinashe released her third album, Joyride, and Simmons played in his first NBA playoff game.

“I have never, ever in my life posted a boy,” Tinashe told Billboard. “…It’s a natural part of my personality to keep a lot private and protected. And yeah, there can be a downside to that. People maybe feel they don’t know who I am. But at the same time, I’m not mad at the fact that the music comes first.” 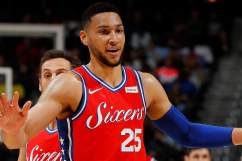 Read More
Basketball, NBA, Philadelphia 76ers, WAGs
Shortly after going public with their relationship, Ben Simmons appears to have moved on from ex-girlfriend Tinashe. Learn more about their former relationship.