Shaquem Griffin’s story has inspired fans all over the country, and his family has had front-row seats on his entire journey. For Shaquem, it all starts with his twin brother, Shaquill Griffin. Shaquill is a cornerback for the Seahawks, and played with Shaquem at UCF.

Shaquem’s parents, Tangie and Terry Griffin, have been instrumental in encouraging Shaquem to achieve his dreams. Shaquem’s mother, Tangie, spoke about watching Shaquem overcome obstacles to be in the NFL.

“It’s priceless,” Tangie explained to NFL Network (via Orlando Sentinel). “I’m trying not to [cry]. As he was saying that [about his hand,] I was getting so emotional. It was such a tough journey. Everything he had to go through and to be here is just amazing. Just amazing. I’m like at a loss for words right now and I’m trying to keep those tears from dropping. It’s a wonderful experience.”

Learn more about Shaquem’s bond with his mom, dad, and brother.

Shaquem was able to learn about the process of becoming an NFL player as Shaquill was selected by the Seattle Seahawks in the 2017 NFL Draft. Shaquill started 11 games for the Seahawks last season, and the two twin brothers ended up running an identical 4.38 in the 40 during the NFL combine. The two played together in college at UCF, but Shaquem red-shirted his freshman season. Shaquill calls his brother an inspiration, and has been rooting him on to join him in the NFL.

2. Shaquem’s Father, Terry, Created Instruments For His Son to Use to Lift Weights

There were some challenges Shaquem had to overcome as he developed as an athlete. Thanks to some creativity by his father, Terry, Shaquem was able to lift weights just like his brother. Sports Illustrated detailed some of the tools Shaquem’s father built for his son.

After the boys enrolled at Lakewood High and began lifting weights to bulk up for football, Tangie would wake to the sound of clanging in the garage. Determined to help Shaquem work out the way his teammates did, Terry built contraptions to allow him to do push-ups, curls and bench presses. “Like a mad scientist,” she says. There was something Terry called “the book” that attached to Shaquem’s left forearm and helped Shaquem stabilize both arms for push-ups and bench presses. A strap device helped Shaquem do biceps curls. Terry welded another contraption onto a weight bar so Shaquem could bench-press more naturally. He grew stronger and stronger, pushing his bench press to 260 pounds as a high school senior. When he came to UCF he got fitted for a prosthetic. It allowed him to do his first pull-up. Tangie cried when she heard news of that milestone. When he first started bench-pressing with the prosthetic, he could only lift the 45-pound bar.

Shaquem was able to participate in the bench press at the NFL combine by wearing a prosthetic, and was able to bench 225 pounds 20 times.

3. Shaquem Joked He Might Get Emotional on Draft Night, But Plans to Hand His Phone to His Brother Because They “Sound Alike”

Receiving the first phone call from an NFL team is one of the iconic moments of the NFL draft. Shaquem was invited to the draft, and has already planned things out in case he gets emotional. Shaquem joked with CBS News that he might ask his brother to pretend to be him, and talk with the team that drafts him.

“I said, if I get a phone call, I might start crying immediately,” Shaquem told CBS News. “If I start crying, then my mom’s going to cry. I’m going to give the phone to my brother. We sound alike. We’ll be just fine.”

Shaquem went from being a late invite to the combine to getting a green room invite for the NFL draft.

4. Shaquem’s Parents Agreed Not to Treat Him Differently Than Any of Their Children

Shaquem’s parents were faced with a difficult decision prior to the birth of Shaquem and Shaquill. Doctors found an issue with a strand of the amniotic membrane wrapped around Shaquem’s left hand while he was still in the womb. They could try to have a risky surgery to fix the issue, or Shaquem would be born with a left hand that had not fully developed.

Angie and Terry decided the surgery was too risky. Early on, the couple agreed that they would not treat Shaquem any different than any of their children. Sports Illustrated detailed their thought process prior to Shaquem’s birth.

Doctors could try to move the band, but if they did, the band might wrap around the neck of one of the twins. I had a choice to say, ‘Let’s try it and pray everything is O.K.,’ Tangie says. ‘But in my mind, that is not an option at all.’ So Tangie and her husband, Terry, discussed how they’d parent a son with a malformed left hand or no left hand at all. Their conclusion? Treat him no differently than their other children. Never let him consider his condition a hindrance.

5. Shaquill Turned Down Offers From Schools Like Florida State & Miami Because They Would Not Offer Shaquem a Scholarship

High school coaches who recruited Shaquill early on realized it was a package deal for the twin brothers. Shaquill and Shaquem made a pact that they would both attend the same school, and would turn down offers if both did not receive a scholarship. Schools like Ole Miss, Florida State and Miami came calling for Shaquill, but did not want to offer his brother.

“We were a package deal,” Shaquill told the Los Angeles Times. “It started when we were young. That was type of bond we had. When scholarships came in, we kept it the same way.”

Their bond ended up taking them to UCF, which was one of the few schools to offer scholarships to both players.

“Before we got to high school, before we got the first offer, we made the decision we were going to stick together no matter what,” Shaquem told the Los Angeles Times. “We talked about going to the same college. We talked about living in the same house when we got older and even dating twins together.”

“So we [along with George O’Leary] graded out their film and both of them graded as offerable,” said Callahan, who is now out football and working in sports orthopedics in Tallahassee. “We weren’t up front with Coach O’Leary, so he was busting on me back then, saying, ‘You’re telling me that in your first ever recruiting class you’re going to sign a kid with just one hand?’

“But he said that as long as they were both legitimately over 6-foot, then he would offer them. They just had to come on campus, and that’s when he first got to meet them. Coach O’Leary kind of set himself apart from the other schools by saying he wouldn’t take one without the other. I know that resonated well with both of them.” 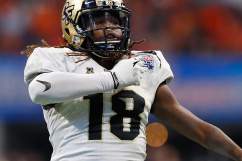