Stephen and Ayesha Curry Talk Parenthood and Their Adorable Pre-Game Ritual | ParentsNBA superstar Stephen Curry and wife Ayesha take you behind the scenes of their Parents magazine cover shoot. Find out the one thing that distracts Stephen on the basketball court, their adorable pre-game ritual, the candy they bonded over, and how they're handling daughter Riley's fame. WATCH THE ENTIRE PREGNANCY WEEK BY WEEK SERIES: https://www.youtube.com/playlist?list=PL_XXfDtFe5UXvUK8H9z-dCJJOxD-YsBFW&hellip;2016-04-29T18:29:43.000Z

Ayesha Curry is a staple at Warriors games, and Steph Curry incorporates his wife into his pregame routine. Steph and Ayesha revealed they have matching tattoos in an interview with Parents.com. Steph has an arrow tattoos on the inside of his left bicep, and Ayesha also has the same tattoo on her left forearm. Here’s a look at Steph’s ink.

Steph Curry's arrow tattoo looks like something you would draw when you were bored in math class pic.twitter.com/DuBxzyD0JU

Here’s an excerpt from the interview explaining the meaning of the tattoo.

Tell me more about eye contact during a game.

SC: We have a pregame ritual right before tip-off where I do a sign, and she does it back.

SC: Should I give it away?

SC: We have matching tattoos.

AC: I guess he’s giving it away. [Stephen lifts his sleeve and reveals a tattoo on his left triceps of two arrows pointing at each other.] Why are you flexing your muscles?

SC: I have to show it. This signifies that the past is behind us and the future is in front of us, so we stay in the middle, in the moment. I smack my tattoo and she does the same.

AC: It’s a reminder for him to have fun. I never want him to forget that.

Don't let the NBA Finals distract you from the fact that Steph Curry has a tattoo on his left that in turn proclaims him as a בעל קרי. #YeshivishNBAName #ברכותפרקג pic.twitter.com/C51mnUmLwu

TMZ reported Bay Area tattoo artist Nino Lapid made a house visit to the Curry’s place after the Warriors won the 2017 NBA Finals. Ayesha and Steph both got additional tattoos, but it does not sound like they were matching this time around. Steph got another set of Hebrew letters, while Ayesha’s new tattoo has not been revealed. Steph’s dad and brother also got tattoos.

I gave him his first tattoo… at the end of the night, i gave hime his second… #boyanek

The couple is expecting their third child, but have not revealed the baby’s gender. Steph and Ayesha already have two daughters: Riley and Ryan. Ayesha has become a successful businesswoman thanks to her passion for cooking. Ayesha along with partner Michael Mina opened a highly successful restaurant called International Smoke in San Francisco. There is a wait-list for reservations, and there are already expansion plans for locations in Houston, Los Angeles, San Diego and Miami.

Ayesha just announced she has partnered with ABC to host a new show called Family Food Fight. Ayesha posted the announcement on Instagram with the funny #pregnantladiesgetitdonetoo.

I’m cooking up a new show with @abcnetwork! I can’t wait for you all to see #FamilyFoodFight – a competition featuring 8 families who will battle for the title of America’s No. 1 Food Family. Not only will they win the title…they will also win $100,000! More deets to come! ❤ #pregnantladiesgetitdonetoo ?

Ayesha has a lot of different titles, but prefers not to be called an “NBA wife.”

“Obviously mom and wife first,” Ayesha said on ABC Nightline. “Those are the two most important titles. I don’t think I’ll ever call myself that. I mean, I don’t think my husband would call himself ‘chef’s wife.’” 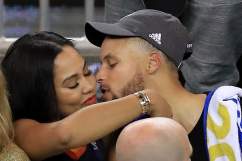 Read More
Ayesha Curry, Basketball, Golden State Warriors, NBA, NBA Finals, Steph Curry
What do Steph Curry's tattoos mean? One of them relates to his wife, Ayesha Curry. Learn more about the couple, and the meaning of Steph's tattoos.