Emeline Grier, Bode Miller and Morgan Beck’s youngest child, died over the weekend after drowning in a neighbor’s pool. Emeline, who was lovingly referred to as “Emmy” by her parents, was just 19 months old.

Following Emmy’s death, Miller and Beck released the following joint statement on Instagram, along with a series of photos and videos of their precious daughter.

We are beyond devastated. Our baby girl, Emmy, passed away yesterday. Never in a million years did we think we would experience a pain like this. Her love, her light, her spirit will never be forgotten. Our little girl loved life and lived it to it’s fullest everyday. Our family respectfully requests privacy during this painful time.

Below are some additional photos of Emmy, posted by her parents.

Commentating for @nbcolympics was an amazing experience, but I’m so happy to be home with my littles

The above photo was posted by Miller after he returned home from the Winter Olympics in PyeongChang, South Korea. Although he didn’t compete in the 2018 Winter Games, Miller was on-hand as a commentator for various ski events.

Miller was happy to be home with his family after the Games, and shared this sweet picture, holding his son, Nash, and his daughter, Emmy, in each arm.

I can't wait to get home to my little princess. She's waiting patiently.

Miller posted the photo above back in February whilst he was in South Korea. The picture shows Emmy lying on the floor wearing a tutu.

Emmy was set to become a big sister. Her parents are expecting another baby in October 2018. They made the announcement on Instagram on Easter.

Happy Father's Day week to all the dads out there. We deserve to celebrate all month but my wife says I only get the week.

Miller and his baby daughter took a picture together to commemorate Father’s Day last June. Almost exactly one year later, he and his wife are mourning the death of their youngest child. Father’s Day is this coming Sunday.

My baby girl, Emeline Grier #BabyEmmy Named after my grandmother who is still rockin' it in her 90's

The picture above was taken shortly after Emeline was born. Shorly after she was welcomed into the world, her parents made headlines after Miller shared a photo of his naked wife holding Emmy. The photo, which was used as a public birth announcement, ended up going viral. You can see it below.

To read more about Emeline’s tragic passing, check out this story: 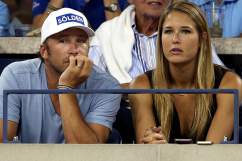 Emeline Grier Miller Cause of Death: How Did Bode Miller’s Daughter Die?