Dustin Johnson has had his ups and downs, but his family has been by his side the entire way. Dustin’s girlfriend, Paulina Gretzky, has been a staple at PGA Tour events, along with their two children, Tatum and River. Tatum was born in 2015, while River was born in 2017.

Paulina is the daughter of hockey legend Wayne Gretzky, who has befriended Dustin since he started dating his daughter. Dustin also remains close to his parents, Scott and Kandee Johnson. Dustin has two siblings: brother, Austin, and sister, Laurie. Dustin’s father, Scott, taught him how to play golf, and used to work as a golf pro at Mid Carolina Club before a dispute. Golf Digest detailed Dustin’s parents lives.

In the late 1990s his life turned inside out. His mother, Kandee, and his father, Scott, divorced. Scott, who was the head professional at Mid Carolina Club, lost his job in a dispute neither side will discuss and hasn’t worked in golf since. He currently has a business putting decals on the sides of delivery trucks. Kandee works for the state of South Carolina. By all accounts, Dustin is close to both of them, but his parents haven’t spoken to each other in 10 years. The fabric of the family was torn. Dustin and his sister, Laurie, chose to live with their father.

Dustin is engaged to Wayne Gretzky’s daughter, and sometimes relationships with in-laws can be tricky. That’s not the case with Dustin and Wayne who have grown close since Dustin started dating Paulina. Wayne has had to exercise tough love at times, reportedly telling Dustin to shape up his life if he wanted to continue dating his daughter.

Dustin has seemed to turn the corner, and Wanye has been there to help him become an elite athlete. Wayne admits he always saw the talent, but it was up to Dustin how far he wanted to take his career.

“If I scored 50 goals in a season, I wanted 70 the next year,” Wayne told Golf Magazine in 2017 (via Sports on Earth). “If I got 70, I wanted 90. Never, ever settle. I’ve told Dustin he has to be more like Tiger. I don’t mean he has to be Tiger — you only get a few athletes like that a century. But part of what made Tiger Tiger was relentlessness. Dustin just won three tournaments and a major [in 2016]. That’s a great year. Now go win five tournaments and two majors. I want him to see that only he can put limits on himself.”

Dustin is the proud father of two kids, River and Tatum. Being a father is not only something that has changed Dustin’s life, but he believes it has made him a better golfer as well.

“Over these past four or five months I’ve really grown up, and I am starting to become the person I want my kids to look up to,” Dustin told Sports Illustrated in 2015.

When Dustin first learned he would become a father, he tried to simplify his life, and get back on track for the sake of his family and career.

“Really simple, that’s what I’ve been working on, really simplifying everything,” Dustin explained in the same 2015 interview. “And her being pregnant makes it that much more easy to simplify things.”

3. Dustin’s Dad, Scott Johnson, Was an All-State Wide Receiver Before an Injury Sidelined His Career

Dustin’s father, Scott Johnson, was also an athlete. According to ESPN, Scott was an all-state wide receiver at Chapin High in South Carolina, and had his eyes on playing college football. Scott was working at a liquor distributorship when he sliced his arm while opening a case of wine. The accident caused tendon damage, and Scott had to have multiple surgeries which abruptly ended his football career.

Scott was the first person to teach Dustin how to play golf, but is mostly a private person. Dustin’s relationship with the former hockey great has been well-publicized, but it is not something that bothers Scott.

“Wayne has been a really good influence on him, and I’m perfectly happy in my role and with the way things are,” Scott noted to ESPN.

4. Paulina’s Parents Introduced Her to Dustin

Paulina’s parents are avid golfers, and knew Dustin from different celebrity golf tournaments. Paulina did not know the introduction was coming, and felt like she did not give the best first impression. Paulina described when she was first introduced to Dustin in an interview with Golf Digest.

At the end of 2011, my mom played with Dustin in the Wednesday pro-am at Tiger’s tournament at Sherwood. She told Dustin about her daughter, blah-blah-blah, and invited him to the house that night. I’m sure he was rolling his eyes, and so was I when my mom invited me over to meet this golfer she had just met. So I show up looking like a complete ragamuffin, and here’s this really cute guy. I didn’t stay long, but he was such a gentleman, so endearing. He’s always been that way to me. We exchanged numbers, and here we are.

5. Dustin’s Parents Divorced When He Was Growing Up

According to Golf Digest, Dustin’s parents divorced when he was in high school. Golf Digest reported the couple had not spoken in a decade, but it is something Dustin’s mother, Kandee, disputed.

“It was like any other divorce, we weren’t the best of friends, but we got along for the children. We were at games together, golf tournaments,” Kandee explained to ESPN. “So it was civil because we had children.”

“Dustin needed some direction,” Terrell noted to ESPN. “He needed a future. But I knew how big his heart was the first time I met him. You can sense what kind of person someone is by the nice things he said about his grandmother, his mom, his sister. Nothing against Kandee and Scott, because it’s just the nature of divorce. But he was bouncing from one house to the next and had to change high schools and there was a lot of stuff going on. He just got pulled onto the wrong trail.” 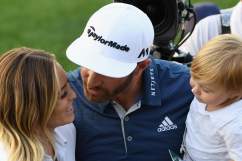 Read More
Golf, US Open Golf
Dustin Johnson's relationship with his girlfriend, kids and parents are crucial. Learn more about Dustin's family, and his bond with Wayne Gretzky.