Police found a dead body at the New Jersey home of New York Giants cornerback Janoris Jenkins. According to TMZ, Jenkins was not home at the time, as he has been spending time in Florida.

“The deceased is not the owner of the residence, but the identity of the male decedent cannot be released until next of kin have been notified,” Bergen County Prosecutor Dennis Calo told ESPN. The case is being treated as a homicide.

Jenkins is a father of five. According to the New York Post, he has five children, ranging in age from 4 to 9, with four women. Jenkins’ oldest is his son, Janoris Jr., and his youngest is his daughter, Journey. His middle children are Janorian, Legend, and Paris.

Jenkins previously spoke to the media about being a father — something that he called “a blessing.”

“It ain’t a lot. It’s just five kids. A lot is something you can’t handle, and I can handle five kids. I’m a great father. I take care of my kids. I do what I got to do. I’m not the guy that’s gonna flash my kids, put ’em out on social media for everybody to see. It’s a blessing to me. Because you got to look at it, I got five kids. I’ll be there for five kids. I can take care of five kids. I could see if I wasn’t able to be there, I wasn’t able to be around, hang out with ’em or nothing, then it would be a problem, but I don’t have those type of problems,” Jenkins told the New York Post back in 2016.

Jenkins’ comments came a few months after he inked a deal to stay with the Giants. It is suspected that his $62 million contract caused two of his ex’s to file court papers, seeking additional child support money. The two women were identified as La’Tasha Jones and Lakenya Campbell, both of whom have one child with Jenkins, according to the New York Daily News.

According to a separate TMZ report, a woman by the name of Sontaevia Armstrong, who has two children with Jenkins, also went to court, hoping to adjust her child support agreement. 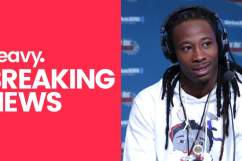