Shooting guard Klay Thompson and his fellow Golden State Warriors are currently up a game on their regular playoff opponents, LeBron James and the Cleveland Cavaliers, in the 2018 NBA Finals. Thompson and the Warriors won Game 1 at home in overtime Thursday night by the score of 124-114.

Tonight’s Game 2 is scheduled for an 8 p.m. Eastern tipoff at ORACLE Arena, in Oakland, California.

Below you will find information about Thompson’s current contract and details about his salary.

“Thompson’s new four-year deal will be worth around $70 million and will keep the Splash Bros. intact through the 2016-17 season, when point guard Stephen Curry’s deal expires,” SB Nation reported at the time.

Among his Golden State teammates, Thompson comes in third as far as total contract value goes. Ahead of his $68.9 million deal is point guard Steph Curry, with a whopping $201 million contract, and power forward Draymond Green, whose deal pays him $82 million. Curry’s $201 million is being paid out over a five-year term, giving him an AAV just over $40 million to lead the Warriors roster. Small forward Kevin Durant is on a two-year, $51 million deal that carries an AAV just over $25 million, which is good enough for second. Thompson’s $17.2 million average value puts him in third, once more.

Across the league, Thompson’s contract is the 14th richest among shooting guards.  DeMar DeRozan of the Toronto Raptors sets the pace with a deal worth $139 million, which is twice as much as Thompson’s. When stacking Thompson’s AAV up against the league’s other shooting guards, he falls a spot to 15th overall. The Boston Celtics’ Gordon Hayward signed a $127.8 million deal with a four-year term, which works out to an average value of nearly $32 million.

According to Sports Illustrated, Thompson and the Warriors are in the middle of negotiating an extension, as he is due to become an unrestricted free agent at the end of the 2018-19 season. It’s always considered mutually beneficial heading into a contract year to have an extension on the books to avoid distractions for the player and in the locker room.

The Mercury News reported at the beginning of the current season that Thompson may be willing to take a “hometown discount,” that is, less money to stay at Golden State, in order to remain a part of a championship organization.

“We’re talking like 24 months away,” Thompson said before practice on Wednesday at Shenzhen City Arena. “But it’s something that definitely crossed my mind, especially when you see guys like Kevin (Durant) doing it,” reads the October 2017 Mercury News piece.

Mercury News added that Durant took almost $10 million less than he could have received on a max contract in order to make room for the Warriors to retain the likes of Andre Iguodala and Shaun Livingston, in addition to signing Nick Young and Omri Casspi as free agents for depth on the Golden State Bench. 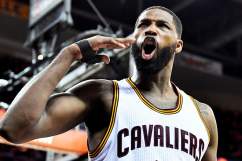