Dustin Johnson is engaged to long-time girlfriend Paulina Gretzky. When Dustin is not on the road on the PGA Tour, the couple enjoys raising their two children, Tatum and River, in Jupiter, Florida. Paulina is the daughter of hockey great Wayne Gretzky, and it was her parents that introduced her to the golfer after a tournament. Paulina is proud to call herself a Gretzky, but prefers to be known for her own accomplishments.

“My dad’s accomplishments are completely different than everything I’ve done with my life and the career path I want to take,” Paulina told E Online. “What he’s done has only been inspirational for me.”

Those accomplishments include acting, modeling, being a recording artist and now a mother of two. Paulina learned from her mother, Janet Jones Gretzky, what it was like living in the spotlight with a professional athlete.

“Totally [went to L.A. Kings games]! I went to games with my mom all the time, especially in New York,” Paulina explained to Golf Digest. “One thing I get from my mom is this constant need to support the person that you’re with. In this athletic world, I see how hard it is for Dustin sometimes.”

1. Paulina Is the Daughter of Hockey Legend Wayne Gretzky

99 on the ice but number 1 in my heart. Happy Birthday Dad i love you so much ??

Paulina admits to not being a major golf fan, but grew up around the sport because she enjoyed being around her father. Wayne and Paulina often attend Dustin’s tournaments, but Paulina has learned to enjoy the sport a bit more. She spoke with Golf Digest about her family’s affinity for golf.

I didn’t appreciate golf as much when I was little, probably because my mom put us in tennis camps and golf camps. My mom has a video of me when I was really young where I’m saying, ‘Daddy, don’t go play golf anymore.’ I just wanted to spend time with him…Oh, I’ve definitely played. I walked all 18 holes in my dad’s tournament. Felt like the longest day of my life, but I stuck through it. The truth is, I was a total tomboy and loved sports. Dad always says I was his best athlete. I played softball until the sixth grade, and that’s when I said, ‘Dad, stop. I’m a girl.’

2. Paulina Appeared in Grown Ups 2 & on the Laguna Beach Soundtrack

Paulina’s mother, Janet, was an actress, and played a number of roles including The Flamingo Kid with Matt Dillon. Paulina took after her mother and appeared in her first role in 2000. According to IMDB, Paulina’s first official movie was Fame in 2009. She has also acted in Guns, Girls and Gambling as well as Grown Ups 2.

Paulina is also a talented musician, and her song “Collecting Dust” was featured on Laguna Beach. Paulina spoke with E Online about her musical style.

“When I first started, I wanted this Avril Lavigne, Gwen Stefani rocker girl vibe, but then I grew up and changed. I have a very raspy voice,” Paulina explained to E Online. “My inspiration has always been Stevie Nicks. Hopefully it won’t sound like what everybody else is doing right now, and hopefully people will see the uniqueness in my voice and fall in love with it.”

3. The Couple Are Proud Parents to 2 Children: River & Tatum

Paulina’s last acting role came in 2013 as she pursues other interest, including being a full-time mother of two. Dustin and Paulina are known for enjoying life at their Florida home by going out on the boat. With two small children combined with Dustin’s golf tournaments, the couple’s schedule is a bit chaotic. Back in 2017, Dustin posted a message to Paulina on Mother’s Day (prior to River’s birth).

“Happy #MothersDay to you @PaulinaGretzky, and the amazing mother that you are to Tatum,” Dustin tweeted.

Paulina has been complimentary of Dustin’s skills as a father. In an interview with ABC, she called him as good of a father as he is a golfer.

“It’s just unbelievable,” Paulina explained to ABC News. “Dustin’s the best dad, he’s my best friend. He’s been so supportive with me and we’re just there for each other. I couldn’t be happier for him.”

Around the time of the 2018 U.S. Open, Paulina posted a photo on Instagram of her getting off a helicopter that likely belonged to Donald Trump. Paulina was a little vague in the post with the simple caption of “HELL? HAMPTONS @kmelnichenko.” She then posted a photo of what appeared to be her in the helicopter.

A sight to be seen?

It would not be the first time Paulina and Dustin have been tied to the president. Just weeks after winning the presidential election, Trump took in a round of golf with Dustin along with Tiger Woods. Trump tweeted out that he would be joining the pro golfers at his course, Trump National Golf Club, in Jupiter, Florida.

“After Turkey call I will be heading over to Trump National Golf Club, Jupiter, to play golf (quickly) with Tiger Woods and Dustin Johnson. Then back to Mar-a-Lago for talks on bringing even more jobs and companies back to the USA!” Trump tweeted.

Photos emerged of Tiger and Dustin playing with Trump.

Dustin and Paulina are known for having a good time, but life with kids can mean a lot of evenings at home. According to Sports Illustrated, the couple enjoys watching a number of shows together including State of Affairs, Homeland and Sons of Anarchy. Dustin noted that having kids has not complicated their life, but revealed what is most important.

“It’s hard to describe, but just from the first day he’s born, your perspective on life completely changes,” Dustin told ABC News after Tatum’s birth. “Things that were important aren’t important anymore. He’s kind of the only thing that’s really important, and being there for him and being a role model for him. It kind of makes life a lot easier I think, just because there’s just one thing that’s kind of all you think about. It definitely simplifies stuff.” 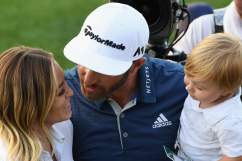