As a rider, you understand the importance of purchasing snowboards for specific riding conditions. You’ve already got your powder and park boards. But, what are the best all-mountain snowboard models?

For the quick and dirty, we’ve determined the Arbor Element Black is the best all-terrain snowboard. It’s an incredible price and super fun to ride.

What makes a snowboard the “best”? We take into account a number of factors:

Price needs no explanation, as we always want the most bang for your buck. Flex generally falls somewhere in the middle–not an overly-flexy or overly-stiff board.

Shape’s a factor because there are some shapes that work better as an all-mountain board, than others. The best shape for all-mountain, tends to be directional twin, but that’s not a hard-and-fast rule.

Typically, all mountains have a hybrid camber of some sort: Hybrid rocker, hybrid camber, and flat-to-rocker. Less common, but still an option, are continuous rocker, flat, and traditional camber.

While a snowboard’s “level of fun” is somewhat subjective, there are certain models that provide a thrilling experience, more so than others.

This guide to all-mountain snowboards is set-up in an easy-to-follow manner. Each capsule has a descriptive headline, along with the price.

Thanks to this template, you can easily skim, or read on for a more in-depth look, at a given model.

What are the best all-mountain snowboards? 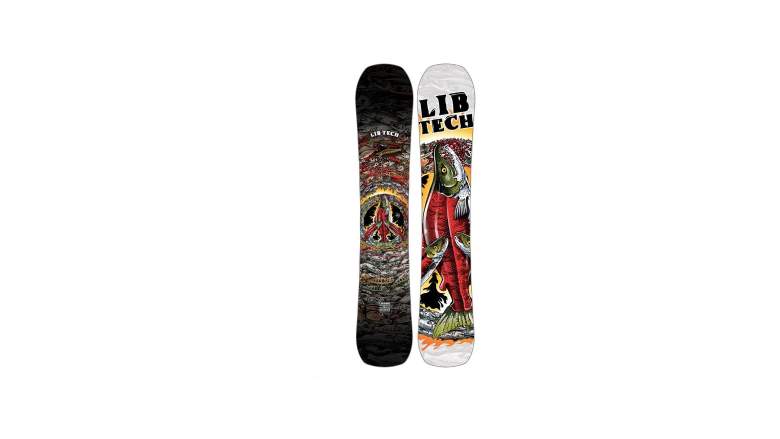 Some days you wake up knowing you’re going to absolutely rip it on the mountain. In order to do so, you need a set-up that allows you to give it your all.

Just like a car, your snowboard has a top-speed it can reach. Think about it: A Bugatti is much faster than a Honda.

So, if you’re really looking to go all-to-the-wall, then you need the Lib Tech E. Jack Knife–this bad boy doesn’t mess around.

To keep the car comparisons rolling, when you ride this Lib Tech model, it’s like you’re revving 750-horse power.

Most all-mountain snowboards are a hybrid camber, and this baby is no exception. It’s a heavy camber-dominant-hybrid at the nose and tail, with a bit of rocker.

With Magne-Traction edges, you’ll grip to almost any surface–even in shockingly-icy conditions.

In essence, the board’s edge is wavy, rather than straight. That means when you lose contact with the “original” points-of-contact, you still have five more to take over.

Not only does this reduce the number of wipe outs on sheets of ice, but it also has the added benefit of major control.

Chutes, trees, moguls, and bowls are incredible under the right conditions. Magne-Traction greatly increases the snow conditions in which you can enjoy these features.

Should Ullr bless you with a powder day, you’re more-than-set. Thanks to a large nose and tapered tail, it allows you to float on top of that white goodness.

On the flip side, if you’re in a park rat mood, this all-terrain snowboard won’t skid out on landings. Your tail bone lives to see another bruise-free day.

If you’re feeling something in-between–aka a solid groomer–you’ll be flying down the run, fully in control. It performs beautifully during quick maneuvers, as well as at high speeds.

While it is slightly-stiffer than other all-mountain snowboards on this list, here’s what the “fun level” comes in.

It provides push back, ultimately allowing you to throttle it. When you have the skill to control a less-flexible snowboard, it affords you the ability to truly rip it on any terrain…while fully in-control. 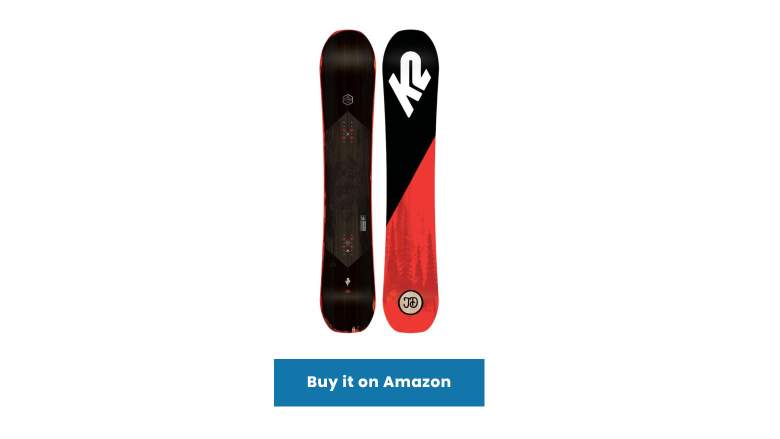 If you’ve been a snowboarder for any length of time, there’s a good chance you’ve tried other snowboards.

Some feel comfortable the second you hook in. Others…well, they take a bit of practice and time, to really master them.

The K2 Joy driver falls into the former category: It’s like you’ve ridden it your entire life.

As it turns out, you probably did ride something similar when you were a kid. This bad boy is the epitome of “classic construction”.

Because it’s cambered and has a mildly-tapered shape, it works in snow conditions ranging from early-morning-ice-to-late-season-mashed-potatoes.

To be more specific, this model is a directional hybrid. It has rocker in the nose, with setback camber.

While it doesn’t have the Magne-Traction mentioned above, it still has phenomenal edgehold. Combined with the immediate comfort, it allows you to put the pedal to the metal.

If you’re big into tricks, it has a lot of pop. Moreover, landing is easy and sure-footed, allowing you to hit big air with confidence.

Should your crew decide on moguls, you’ll move through them with ease, because it jumps and catches, making transitions a snap.

No matter what you decide to ride with this awesome all-terrain snowboard, you’re totally prepared. 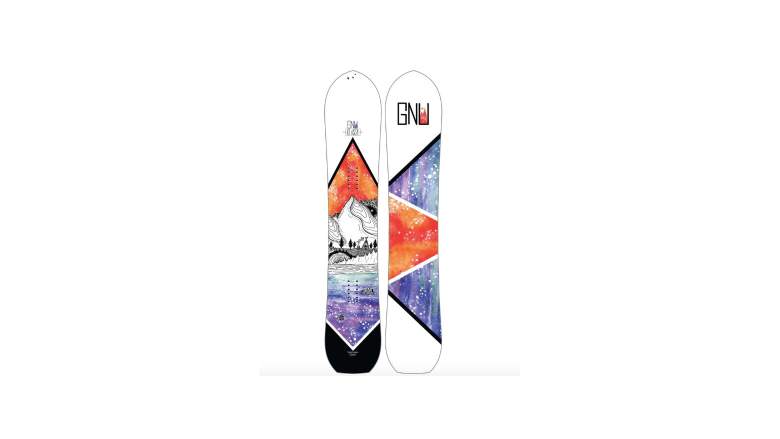 Just like other sports, professional snowboarders often release their own line of decks, bindings, and even apparel.

This beauty by Gnu was crafted by the incredible Kaitlyn Farrington. In fact, it’s back for year two because of its popularity.

Well, I’ve got the perfect in-between option: The Gnu Klassy.

Like other all-terrain snowboards on this list, it’s also a hybrid–a hybrid camber, at that. More specifically, it boasts camber underfoot, and rocker in the center.

Its directional shape allows you to hit almost any feature on the mountain. But you won’t just ride, you’ll ride in an excited, fun manner.

This board is especially wonderful in powder conditions, owing to a set-back stance. A medium flex allows for substantial torsion.

I haven’t even mentioned the best part: It’s price. You won’t balk at it–it’s far better than other decks on this list.

Right here, you’re looking at one of the best women’s all-terrain snowboard models. 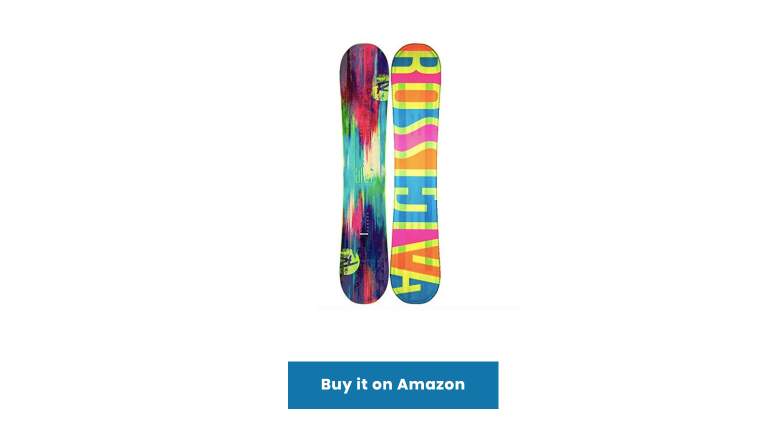 “Rossi? Why did Rossi make the list of the best all-mountain snowboards? It’s a freakin’ ski company, ya weirdo!” And, you’re right.

But, they also produce some pretty bomb snowboards, too. In fact, they manufacture one of the top women’s all-terrain snowboards: The Diva LF.

While most models on this list are all-terrain, they tend to lean towards the non-park aspects of a mountain.

The Diva, though, leans slightly more towards the trick-end of the snowboard spectrum. It has a ton of press and playfulness.

That bit of pop makes tree jibs a breeze. Heck, sending it off of a flat will put a grin on your face.

Should you choose to grab some air, its lightweight feel makes spinning a chinch. On the flip side, landings are solid.

As you’d expect in a snowboard geared towards the park, it has a twin directional shape. This allows you to land either way, and continue on with ease.

It has a hybrid profile, with a teeny tiny bit of rocker in the tip and tail, and camber underfoot.

Outside of the park, it’s super responsive to turns. That means you can hit moguls and hardpack with ease–especially with the Magne-Traction edges.

For times you’re feeling especially playful, whipping this baby around is easy as pie.

You’ll be thrilled you chose to ride one of the best women’s all-mountain snowboard decks. 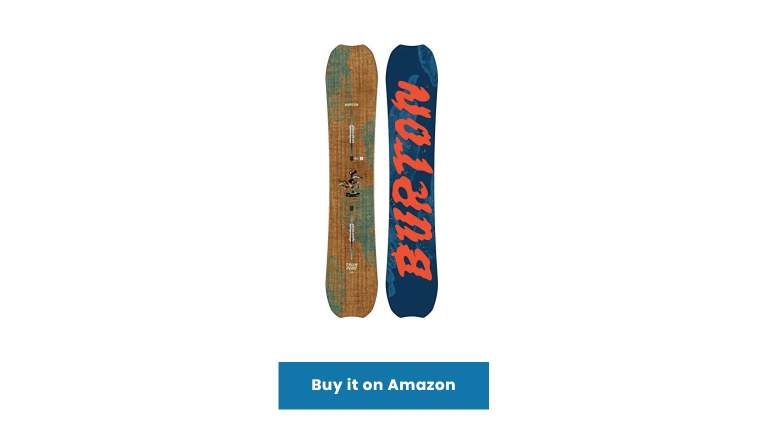 When it comes to a list of the best all mountain snowboard models, you knew a Burton would be on here eventually.

After all, they’re arguably the most well-known snowboarding manufacturer on the planet. Jake, their founder, contributed significantly to the snowboarding scene.

Well, when it comes to riding all types of terrain, as far as Burton goes, you want to give the Trick Pony a go.

When it was first released, it was a flat-to-rocker. Nowadays, though, it’s almost entirely camber–it does have some flat spots near the tail and tip.

What’s most astounding, though, is the fact they’ve been able to make a virtually catch-free snowboard. That being said, it’s easy to transition to switch, while retaining that no-catch feel.

On top of that practically-zero-catch quality, they’ve managed to make the board faster, while creating better carves, with more pop. Uh, what?! It’s like upgrading every aspect of riding.

As a directional twin shape, you’d expect it to do ok in powder. Surprisingly, it rides better in pow than you’d think. (Technically, it’s true twin, with a 12.5mm setback stance).

With each model, the board’s carving has improved significantly, which really makes it fun to rip up the mountain, with some hardcore carves.

When transitioning edge-to-edge, it’s quick and easy. That being said, you can skid on your turns, if you’re not careful. In other words, it’s not the best choice for a beginner.

Once you get to higher speeds, it maintains a stable feeling. So, you should be able to ride fast with confidence. 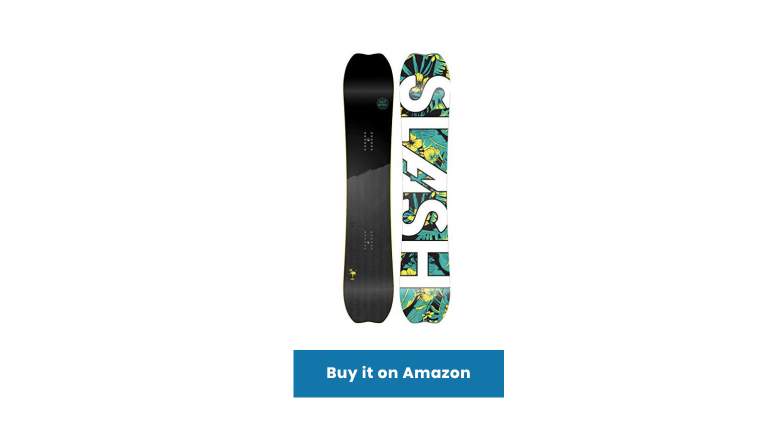 As you know, snowboards differ in the way they ride. That difference could lie in their ideal terrain, as well as how they feel.

There are just times where you want to shred…but not put in a ton of effort. I wouldn’t say “lazy snowboarding”. Instead, I’d label it “effortless snowboarding”.

The best way to execute this type of ride is with a Slash Brainstorm.

You may or may not have heard of Slash before—and that’s ok. The only thing you need to know is they produce a solid all-mountain snowboard.

As soon as you strap in and stand up, you pretty much point and go. From there, you’ll float with, well, effortless ease.

It becomes even more effortless on a powder day, for a number of reasons:

When it comes to carving, executing a solid one is a snap. Leaning into a deep carve feels comfortable–not like a wipe out is coming.

While it carves well, it is not the most aggressive board in the world. Remember: It’s built for effortless riding–that’s what makes it fun.

As you increase speed, you’ll still feel stability between your feet. Once you’ve gained speed, it keeps it up quite well.

Flexiness is solidly in the middle of the spectrum, with a similar flex-feel. That is, it’s not too flexible, and it’s not too stiff.

The best all-terrain snowboard for effortless riding is this baby right here. 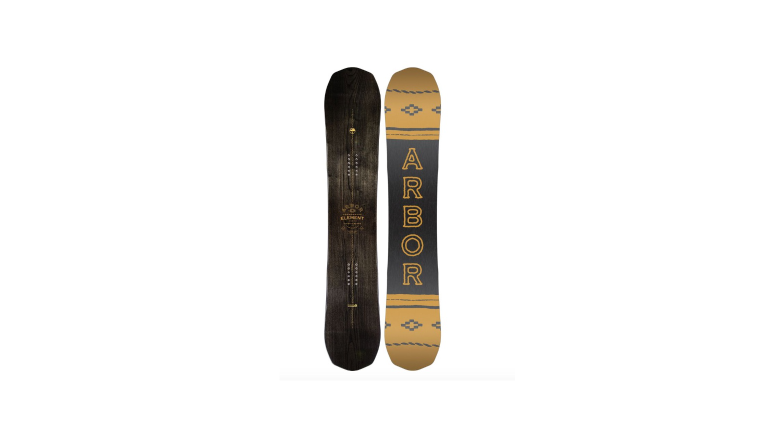 No list of the best all-terrain snowboard models would be complete without mentioning Arbor.

They’ve produced high-quality, fantastic decks for many years. If you’re into skating, they also manufacture a solid line of longboards, too.

One model is the cornerstone of their lineup: The Element.

The 2018 model received a makeover, with a hand-dyed Ash Powerply top sheet. Knucklehead tips provide a cool vibe, while aiding in the board’s ability to float in deep powder.

Like the Slash Brainstorm we saw above, it also provides an effortless riding experience. A mixed fiberglass provides a not-too-stiff feel, while 360 degree rails increase impact protection, with added durability.

Even with the 2018 models’ facelift, it still boasts the same well-loved shape and profile of the OG Element. The key differences lie in the construction, allowing it to be offered at a cheaper price.

It has system rocker, which incorporates a number of design elements, in order to maintain stability, pop, and hold, while displaying true rocker performance.

Moreover, it features a parabolic arc, that’s less-rockered at the tail and tip, and more-rockered between the bindings. This allows for catch-free riding on hardpack, and easy turn initiations.

Unlike the traditional two-points-of-contact, this model has four of them. This provides grounds for a stronger, more reliable hold.

As you’d expect with any Arbor board, it’s built with less-toxic materials and sustainably-harvested woods–making it a lower impact on the environment.

Arbor is always a solid choice, and the Element is no exception.

Read More
Guides, Shopping, Snow, Snowboarding, Sport, Sports, Top 10
wpDiscuz
0
0
Would love your thoughts, please comment.x
()
x
| Reply
While the best all mountain snowboard models may be subjective, we've put together our list of our favorite all-terrain snowboards. Check it out here!