South African golfer Erik van Rooyen has made an early impact at his first ever British Open, sitting one shot out of the lead entering the second round of play on Friday. Van Rooyen, 28, plays on the European Tour and isn’t too well known in America, but he does have ties to the United States.

Van Rooyen played college golf at the University of Minnesota. While in the U.S., van Rooyen met his wife, Rose Roberts van Rooyen, an American who was also a Golden Gopher. He turned pro in 2013. He has won twice as a professional, at the Hainan Open on the Challenge Tour in October 2017 and at the Eye of Africa PGA Championship on the Sunshine Tour in February 2017.

Van Rooyen’s parents and siblings, a brother and sister, have been supporting him throughout his career in golf. Van Rooyen often posts photos with his family on social media, using #teamVR. Here’s what you need to know about The Open Championship contender’s wife and family as he pursues the Claret Jug:

1. Erik van Rooyen Was Born in Bellville, South Africa, Where His Mother Works at a High School & His Father is a Business Executive

The one that keeps us all together. Love. Kindness. The best of the best. Lief vir Mams @elizabeth_van_rooyen #MothersDay

Erik van Rooyen was born February 21, 1990, in Bellville, South Africa, according to his bio on the European Tour’s website. His parents are Wim and Elize van Rooyen, his bio on the University of Minnesota’s website says.

According to her Facebook page, Elize van Rooyan and Wim van Rooyan know live in Douglas, South Africa, where Elize works at Douglas High School. Wim van Rooyan is a business executive and currently works as managing director for GWK Farm Foods, according to the company’s website.

He wrote a post dedicated to his mom on Mother’s Day in 2018 on Instagram, writing, “The one that keeps us all together. Love. Kindness. The best of the best. Lief vir Mams.” 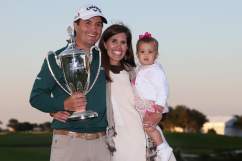 2. Van Rooyen Was Introduced to the Game of Golf by His Father & Grandfather

Erik van Rooyen was introduced to and learned the game of golf from his father, Wim, and his grandfather, according to The Gremlin, an online newspaper for his hometown area.

Van Rooyen grew up in Oudtshoorn and graduated from Oudtshoorn High School, according to his bio on the Minnesota Golden Gophers golf website. He played for four years at the University of Minnesota, from 2009 to 2013, and was a team captain his senior season. While van Rooyen’s parents and family call him Erik, his teammates and friends call him Freddie or Fred, short for his given name Frederick, according to The Gremlin.

What a week! First time in China. First win in China. Thanks to everyone for the messages and support. It's truly humbling knowing there's so many people out there watching and following along as I chase this dream. #TrophyHunter

Van Rooyen told the newspaper it was a tough choice to leave his family and South Africa to go to college in the United States. “We don’t have a college aspect of the game, so we don’t have a college-level sport. That’s why a lot of international kids come here to play golf — because it’s so competitive, and you can get your degree along with that,” he said in the 2012 interview. “That’s when I started thinking about how I kind of want to play professionally and college was a route that I wanted to go.”

He added, “The first year was kind of hard obviously because you’re so far away from home, and you don’t get to speak your native language everyday, which was really different at first.” His native tongue is Afrikaans. “With our golf team, we’re really a close family, and that was really easy for me because I had friends from the get-go.”

The weather didn’t help his adjustment. “It sucks going from 110 degrees and then come here, and it’s 10 below. It’s a little crazy, but you get used to it.”

3. He Has an Older Brother & a Younger Sister

Van Rooyen has two siblings, an older brother and a younger sister, according to the University of Minnesota’s website. His brother, Francois, is 31. His sister, Marlean, is 23.

His brother is married and has young children. Van Rooyen has often posted photos with his niece and nephew on his Instagram page.

It began in Cape Town,SA where I used to annoy and chase my sister.Now I'm chasing the green jacket @nike #justdoit

In a throwback photo from his youth, van Rooyen wrote, “It began in Cape Town,SA where I used to annoy and chase my sister.Now I’m chasing the green jacket.” 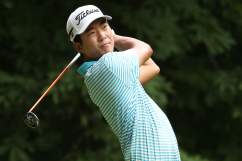 4. His Wife Studied Fashion & Design & Now Works in Online Retail After a Stint as Her Husband’s Caddy

Best pic. Of all time. Ever. @roseroberts27

She graduated from the University of Minnesota in 2013 with a degree in retail merchandising from the Carlson School of Management and a degree in design. She was a member of the Fashion & Design club and was on the hockey cheerleading team, according to her Linkedin profile. After working for a year as a merchant analyst for BestBuy, Rose van Rooyen has been working as an online retail buyer for BabyGroup in South Africa.

Along with her career, Rose also spent some time as her husband’s caddie, according to the European Tour website. She was by his side on the course on the Challenger Tour in 2017.

“My wife Rose was on the bag for about half of last season on the Challenge Tour and I pulled my own trolley for the other half. She doesn’t play golf, but she loves the game. The extent of her knowledges ends at knowing what birdies, pars, and bogeys are, so we needed a quick yardage lesson or two before she jumped on the bag,” Erik van Rooyen told the European Tour website. “The idea behind it all was to try and conserve a bit of my energy, and by the time Oman came around she was amazing, knowing the wind direction and how far all my clubs went. We both enjoyed the experience and it’s something we’ll have for the rest of our lives. She wants me to succeed so much, we almost share the dream together of me being a professional golfer – winnings Majors and big tournaments if that is what is in store for us. That’s what makes it so great, that she wants me to succeed as much as I do, and it was really special to share those moments last year.”

People take pictures here? For some reason it felt like a good spot. #StAndrews #SwilkenBridge

Erik van Rooyen and his wife now live in Johannesburg, South Africa, according to the European Tour website. His home course is the Country Club Johannesburg.

Here's to traveling the world and making memories and having the best time of our lives. This girl is the best part of me, by far. #Love #Anniversary

On Instagram, van Rooyen wrote about his wife, “Here’s to traveling the world and making memories and having the best time of our lives. This girl is the best part of me, by far.” 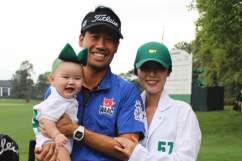