Getty DeMar DeRozan is headed to the San Antonio Spurs.

After months of rumors, the San Antonio Spurs have finally put an end to the Kawhi Leonard saga, giving fans a clearer picture of their roster heading into the 2018-19 season. ESPN’s Adrian Wojnarwoski reported the Spurs have traded Leonard to the Raptors in exchange for DeMar DeRozan, allowing the team to get another All-Star back for Leonard. Danny Green, Jakob Poeltl and a first round pick are also expected to be included in the deal.

Let’s take a look at the updated Spurs roster and projected starting lineup with DeRozan now in the mix. Keep in mind, this is not the final roster as there will be cuts made before the start of the season.

Tension was mounting between Leonard and the Spurs making it clear a move had to be made. All reports indicated Leonard’s preferred destination was Los Angeles, but the Spurs were able to make a move with Toronto despite Leonard’s unknown long-term future.

DeRozan slides into the starting lineup, but the rest of the Spurs lineup is a little less clear. We have Rudy Gay back in the lineup, with Manu Ginobili coming off the bench. The Spurs also had to part with Green, and Tony Parker signed with the Hornets this off-season. San Antonio was able to add Lonnie Walker in the draft, a player many expected to be picked in the lottery. The Spurs still need to add another point guard to the roster with Dejounte Murray as the only natural one on the roster.

ESPN reported DeRozan was not happy with the Raptors after being assured he would not be traded during a meeting at Summer League. DeRozan posted an early morning Instagram post as ESPN detailed.

In a story posted on his Instagram page on Wednesday morning, DeRozan wrote, “Be told one thing & the outcome another. Can’t trust em. Ain’t no loyalty in this game. Sell you out quick for a little bit of nothing… Soon you’ll understand… Don’t disturb…”

DeRozan is on a sizable contract, but the Spurs will have the shooting guard for three seasons on his current deal. According to Spotrac, DeRozan will make $27.7 million in each of the next three seasons. DeRozan is still in his prime and gives the Spurs a player to build around with Leonard no longer in the picture. DeRozan averaged 23 points, 5.2 assists and 3.9 boards for the Raptors last season.

The one challenge for DeRozan is his lack of shooting ability. DeRozan shot just 31 percent from three, which was the second highest percentage of his career. DeRozan is a slasher who gets the majority of his points by attacking the rim. San Antonio is also getting Poeltl, who is a big man just two years removed from being a top 10 pick. With Parker and Leonard no longer in the picture, the Spurs are moving in a different direction, and it will be fun to watch how the new pieces fit going forward. 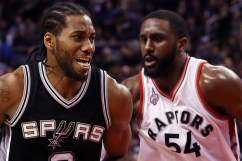