The buzz surrounding Orioles infielder Manny Machado is currently at an all-time high, and according to multiple reports he will be traded to the Los Angeles Dodgers. The deal, as reported by CBS Sports, would likely include sending Machado and cash to the Dodgers, while Dustin May, Errol Robinson, and Yusniel Diaz would be sent to the Orioles.

Diaz, 21, is ranked by MLB Pipeline as the Dodgers’ No. 4 prospect and No. 85 in all of baseball. Diaz has yet to play a major league game, but several players, including Red Sox legend David Ortiz, has said that he has what it takes to become a star. “His approach is legit,” Ortiz told MLB.com, “That’s what impressed me.”

Here’s what you need to know about Yusniel Diaz:

Diaz was born on October 7, 1996 in Havana, Cuba. At age 17, Diaz played with the Industriales de La Habana of the Cuban National Series (Serie Nacional de Béisbol) which is the primary domestic amateur baseball league in Cuba. He was on pace to be the Rookie of the Year in the senior Cuban League, batting .348 in 65 games with 36 walks, 33 strikeouts and seven stolen bases, but he chose to defect to the Dominican Republic instead.

According to Think Blue, he held a workout in the Dominican Republic when he was 19, which was attended by scouts from several different MLB teams. He eventually signed with the Dodgers for $15.5 million. Ben Badler, the for Baseball America, said that the Dodgers had been keeping tabs on Diaz dating back to May 2014, and that they made a point of signing him as soon as he was eligible for the 2015-16 international signing pool.

At the time of his signing, Diaz was ranked 17th in Baseball America’s Top 20 Cuban players. Diaz was one of several Latin American players that the Dodgers signed in 2015, and he received the second-highest salary behind Yadier Alvarez. He made his Dodgers debut in 2016 High-A ball, and put up a solid slash line of .267/.326/.415.

2. He Was Invited to the Dodgers Major League Camp In January

Post Game Chats – Yusniel Diaz – Dodgers ProspectMy sincere apologies for the re-focus of my camera in this video. Yusniel Diaz is the Player of the Month for June in the California League and was one of the offensive players of the game tonight as the Quakes defeat the 66ers 6 – 4. Special thanks to Yusniel Diaz for his time and…2017-07-09T08:14:44.000Z

Diaz continued to work his way through the Dodgers minor league ranks, opening the 2017 season with High-A Rancho Cucamonga, where he hit .278/.343/.414 in 83 games, and then with Double-A Tulsa, where he hit an impressive .333/.390/.491 line in 31 games. Diaz’s success eventually led the Dodgers to invite him to their major league camp at the beginning of the 2018 season.

A few weeks later, CBS Sports reported that Diaz was going to be held back in extended spring training, and he eventually joined up with Double-A Tusla. The club did not state the exact reason why, but CBS cites injuries as a possible cause.

Despite his solid play, Diaz admitted that he does feel pressure to improve his play, and deliver on the initial promise that the Dodgers saw in him.“I’m trying to satisfy all the expectations on me. I’m trying to work to get those stats up and get my power going,” he told True Blue LA. “I’m working out more, trying to get stronger. When I’m in the cage I’m trying to focus on power.”

3. He Has Suffered Multiple Injuries Throughout His Career

Despite putting up solid numbers, Diaz has had to deal with several different injuries throughout his playing career. In April, the unspecified injuries he suffered caused him to be held back in extended spring training, where he did not make his 2018 debut until April 18.

Less than a month later, Diaz suffered a hip injury and was placed back on the DL. In an SB Nation scouting report, cited Diaz’s proneness to injury and felt that it was a hindrance to his overall game.

“To Diaz’s credit, his swing improvements prove a willingness to address his shortcomings,” the report states. “Though his lack of physicality and plus foot speed are natural obstacles to a traditional profile in center or right that aren’t easily overcome.”

Diaz clobbers 2-run jack, game-tying HRYusniel Diaz hammers a two-run home run in the 5th inning, then ties the game with a solo jack in the 7th inning of the Futures Game About Major League Baseball: Major League Baseball (MLB) is the most historic professional sports league in the United States and consists of 30 member clubs in the U.S.…2018-07-16T05:13:10.000Z

Diaz had his biggest showcase to date at the 2018 Future All-Stars Game, which was held at Nationals Park. Diaz, who considers himself more of a contact and opposite field hitter, swatted two home-runs during the game, making him only the second player in history to do so. The first was former Yankee superstar Alfonso Soriano in 1999.

“I’m really inspired and really happy, for the fans and for my family who came to support me,” he said. “Expect the best from me. I’m going to leave everything on the field. Those two home runs came from the heart.”

David Ortiz, who managed the World Team and got to work closely with Diaz, gushed about his talents to MLB.com. “This guy hits like he has two strikes — with power. That’s something that impressed me a lot,” he said. “The two homers that he hit, they were, like, big guys’ bombs. He looked great.”

5. Diaz Is Reportedly the Difference Maker In the Manny Machado Trade

Machado is being pursued by a number of ball clubs, including the Milwaukee Brewers and the Philadelphia Phillies. The difference maker for the Dodgers, according to MLB insider Jon Heyman, is that they are willing to include Diaz in the deal.

“The Dodgers appear to be the leading contender for superstar Manny Machado as talks head toward the finish line,” he tweeted on Tuesday. “The situation is fluid and brewers and phillies may still have an outside chance. Barring turnabout, deal should be done this week.”

yusniel diaz, believed to be the centerpiece of the deal from the orioles' perspective, according to one scout is "an absolute stud." hit 2 dingers in futures game, many tools.

“Yusniel Diaz, believed to be the centerpiece of the deal from the Orioles’ perspective, according to one scout is “an absolute stud.” hit 2 dingers in futures game, many tools,” Heyman confirmed in a separate tweet.

While the Orioles are said to be prioritizing pitching, according to SportsNaut, Diaz’s recent tear at Double-A Tulsa, where he’s currently hitting .314 with six homers and 30 RBIs, is reportedly too good for the ball club to pass up. 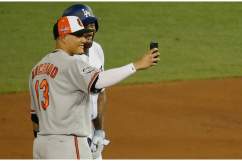