Getty/Facebook Brianne Aron Sale is the wife of Boston Red Sox pitcher Chris Sale, who is playing the Yankees in a playoff series. Here's a look at her life and family.

Chris Sale is a pitcher for the Boston Red Sox, who are playing the Yankees in the playoffs starting October 5. Sale, who spent all of his career with the Chicago White Sox before he was traded to Boston, is married to Brianne Aron Sale. The couple have two children, including 8-year-old son Rylan.

The 29-year-old Sale is a native of Lakeland, Florida and was first drafted out of high school by the Rockies in 2007. He attended Florida Gulf Coast University in Fort Myeres and was drafted again in 2010 by the White Sox. Sale began his MLB career as a reliever, but transitioned to starter for the 2012 season. Since then, he’s made the AL All-Star team every year.

Here’s a look at Brianne and the Sale family.

1. Sale & His Wife Have Helped Out Laces of Love to Donate Shoes to Children

Sale and his wife Brianne remain close to Florida, where they have a home in Naples. While Sale was in Chicago, Brianne stayed in Florida to complete her degree at Florida Gulf Coast University.

Brianne inspired Sale’s support of Laces of Love, a charitable foundation in Florida that helps needy children get the shoes they need. The charity claims to have provided 90,000 pairs of new shoes to children in Southwestern Florida.

As the Naples Daily News reported in 2015, Brianne heard about the charity during a class, when she was required to volunteer with a nonprofit organization. She met Jeanne Nealon, who started the charity in 2005, and got excited about the cause.

“She started talking to Jeanne, and Jeanne is as in love with this as anybody I’ve ever seen in love with something,” Sale told the Naples Daily News. “She’s very passionate about it. She has pictures of her with shoes all over her entire house, doing this for the kids. Talking with her really inspired us to want to help.”

When Sale and Brianne promoted the charity at an FGCU women’s basketball game in January 2016, they helped raise over $2,000 in donations and collect over 500 pairs of shoes.

Brianne and Sale have two young children, including son Rylan. Their second child was born in December, just weeks after he was traded to Boston. As the Chicago Sun Times noted after the trade, Sale could live at home during Spring Training, since the Red Sox train in Fort Myers. The White Sox’ Spring Training facility is in Arizona.

Being close to Ryan is important to Sale, who has a close relationship with his father, Allen Sale. In October 2013, Sale told MLB.com that he cherishes the moments he shares with his son.

“Especially when I don’t get to see him too much during the season, you’re on the road a lot,” Sale told MLB.com. “Being able to share this means the world to me.”

Sale met his future wife Brianne while a sophomore in college. The couple married on January 11, 2011 and had a formal ceremony exactly a year later.

In that interview, Sale said his son Ryan, is “fearless, a ball of energy.”

According to her LinkedIn page, Brianne studied public relations and philosophy at FGCU.

Sale skipped the 2010 Draft so he could be with Brianne and Rylan, who was only a month old at the time. As ESPN reports, the couple found out they were expecting their first child in fall 2009. Sale’s FGCU teammates and coach joined him at home to watch the draft though.

“To do what he did as a junior — win national player of the year [selected by Collegiate Baseball], go undefeated, get drafted in the first round and get the news halfway through the season that there’s a baby on the way, it was a lot for a 20-year-old to handle,” Dave Tollett, Sale’s coach at FGCU, told ESPN in December. “I don’t know if anyone else that I’ve ever coached could’ve handled that the way he did.”

Sale was first drafted by the Colorado Rockies in 2007, right out of high school. His father, Allen Sale, told the Naples Daily News in 2010 that Sale’s decision to go to college was his own. His parents thought he should have turned pro. After all, the Rockies offered him a $100,000 signing bonus.

“Education was a priority for my wife and I and also for our daughter,” Allen told the Daily News. “It really was not a priority for Christopher. When I sat down with him, I said, ‘If you’re going to be committed to baseball and education at Florida Gulf Coast like you’ve been dedicated to education and baseball in high school, you might as well take the money the Rockies are offering you and head to Arizona.'”

But Sale decided himself to focus on education more than he did while in high school. 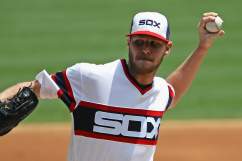 5. Their Son Rylan Thought His Father Would be Nervous to Pitch Against the White Sox

In a December 2016 interview with the Boston Globe, Sale said his son really likes the Boston Red Sox logo.

“He loves the hat with the big ‘B’ on it,” Sale said. “The White Sox were the only thing he’s ever known, but he’s getting used to it. I guess I am, too.”

In late May of 2017, when Sale faced his old team for the first time, the pitcher said Rylan asked him if he was nervous about playing against his former team.

“A little bit of me will be, but I think I’m more looking forward to this opportunity than any other emotion just because it’s fun. I’m playing against my friends,” Sale told the Associated Press. “It might be hard to not smile out there on the mound at a couple of them. It’s fun.”

Rick Lademann, the co-founder of the Beyond Motion health and fitness facility where Sale has worked out in the past, told the Chicago Tribune in 2016 that Sale is “like a hermit.”

“He doesn’t go out,” Lademann told the Tribune. “He loves his wife (Brianne) and son (Rylan) … and video games. He’s not into the limelight. There is no rock-star mentality.”