Charlise Kristine Castro is 26 years old and hails from Saugerties, New York. She is the wife of Houston Astros’ outfielder — and the 2017 World Series MVP — George Springer. The couple tied the knot earlier this year.

As for what’s going on in the world of Mr. and Mrs. Springer these days, the right-handed batter has found himself back in the postseason, his team facing off against the Boston Red Sox in the ALCS.

Castro, who has been cheering her man and his team on throughout the playoffs, majored in psychology before switching gears to study communications. The daughter of Angel and Jenelle Castro is also an athlete and played softball in high school and all through college.

Want to wish Goodluck to my better half along with the rest of the Astros today for their home opener!??⚾️#houstonstrong

Castro walked down the aisle to say “I do” to Springer during the off-season. The couple exchanged vows in a stunning outdoor ceremony, held at the Resort at Pelican Hill in California.

The wedding has been described as “luxe,” and it’s easy to see why.

“The ceremony began at sunset, where guest chairs were arranged in front of the Italian rotunda that sits on the property, perfectly placed to provide picturesque views of the ocean. Thousands of fragrant ivory florals bedecked the area, in addition to towering configurations of greenery spelling out ‘C & G.’ The aisle was richly covered in petals and timeless flower arrangements; even the rotunda was heavily dressed in vanilla blossoms.”

You can see a picture of the outdoor venue below.

Castro wore a white, fitted, mermaid-style gown with a lace overlay. You can see a photo of her dress below.

Lovin’ the crew in honor of a new season⚾️?#baseballfam#houstonastros

Springer walked to the makeshift altar with the Game of Thrones theme song playing.

“George is a big kid at heart, so he wanted something awesome for his entrance. All of our guests were cracking up as he walked past them. It was amazing to hear the string quartet play the tune from one of our favorite shows… everyone thought it was great,” Mrs. Springer told Inside Weddings.

2. She Said ‘Yes’ to Springer’s Romantic Beach Proposal in December 2016

Castro and Springer were on vacation in San Jose Del Cabo, Mexico, in December 2016, when Springer got down on one knee and proposed to his lady love.

The couple was enjoying a beautiful, picturesque evening in Mexico when Castro got the surprise of a lifetime. According to ABC 13, Springer had planned a gorgeous beach proposal, complete with the words “Will you marry me?” written in the sand.

Shortly after saying “yes,” Castro took to Facebook to share the exciting news with her family and friends.

“Filled with inexplicable happiness and unconditional love because I am marrying my best friend!! I absolutely cannot wait to call you my husband!!!!” Castro wrote. She also shared a couple of sweet photos, which you can see below.

After returning home from a trip they’d never forget, Springer announced their engagement on Houston Astros Radio. The team made another announcement on Twitter and even shared some photos from the super-romantic beach proposal. You can those photos below.

Springer announced on #Astroline that he is now engaged! Big congrats to George and his new fiancé! ? pic.twitter.com/COHuM8IfZv

3. She Works as a Personal Trainer

When she is not busy cheering on her man at Minute Maid Park, Castro was working as a personal trainer. Although she previously had a website, it doesn’t seem to be active anymore.

Healthy living is something that Castro is passionate about. She posts recipes and workouts and is dedicated to helping other people achieve their fitness goals.

“I invest my time, love and energy to help others succeed in all areas of their fitness journeys. I believe that in order for someone to truly ‘find himself or herself,’ happiness will need to play a major role. I will push you. I will make you hungry. I will help you to see a different outlook on life. I am invested in my clients. I want to know who they are. I yearn to understand their character. Most importantly, I love to work with individuals who strive and go after what they want in this world. I am a believer that ‘Knowledge is power.’ … Over the past few years I have become well versed in the health and fitness arena. Through experimentation and experience, I have gained valuable knowledge that has helped me develop my mind, body, and soul. Let ME help YOU stay true to yourself and develop into the person you want to be, both physically and mentally,” read an excerpt from her blog.

4. She Attended the University of Albany & Earned a Degree in Communications Before Heading to Grad School

She graduated from the University of Albany with a bachelor’s degree in Communications and decided to go to graduate school. She obtained her masters in Business Administration from the the College of Saint Rose, which is also in Albany, New York.

Before that, Castro attended Kingston High School. In 2010, she became the captain of the school’s softball team (she played catcher and first base).

5. Castro Was a Softball Player in College & Played for Puerto Rico’s National Team

Castro was a softball star in college. In fact, she was named America East Conference Player of the Year in 2012. That year, she became the second player to ever win the league’s Triple Crown in conference history, according to the Houston Chronicle. At that time, she was hitting .461. She had 13 home runs and 53 RBIs.

Throughout her college years at Albany, Castro hit .369 and had 33 home runs and 124 RBIs. She played in 149 games. Aside from playing softball in college, Castro was invited to join Puerto Rico’s national team and play on an Olympic level. When it came to playing softball professionally, however, Castro decided that she wanted to focus on her “passion for health and fitness” instead.

“Hardworking parents who refused to let me settle for anything less than my best raised me. In high school, I was a three sport All-American athlete. I played volleyball, softball and basketball, in which I excelled in all three. In the midst of juggling school, work and sports, it all paid off when I received a Division I scholarship. I continued to work, go to school full time, and play a sport I loved. It all paid off again when I had the opportunity to play Olympic softball. After playing internationally, I was presented with the opportunity to continue my career professionally, but ultimately my passion for health and fitness steered me away,” read a blurb in the “About Me” section of Castro’s website (which is no longer live). 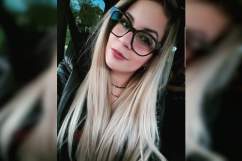