Getty Chicago Blackhawks mascot "Tommy Hawk" was caught on video bodyslamming a fan who attacked him Friday night at the United Center.

Chicago Blackhawks mascot “Tommy Hawk” was caught on video bodyslamming a fan who attacked him Friday night at the United Center. According to the Chicago Sun-Times, the mascot was punched and put in a headlock by the attacker. In the video, Tommy Hawk bodyslams the fan before throwing a few punches.

The incident quickly went viral on social media. Check out the video below:

In the video, Tommy Hawk can be seen grabbing the fan and slamming him on the ground, before landing a few quick punches around the man’s face. The two men get back to their feet, and the mascot still appears to have the man in a headlock, as they scuffle across the floor, into a garbage bin and toward a door.

“We are aware of an incident that occurred on Friday night between an individual and a Blackhawks’ employee at the United Center,” the team said Saturday in a statement, according to the Sun-Times. “We are gathering the facts and will have no further comment at this time, pending our investigation.” 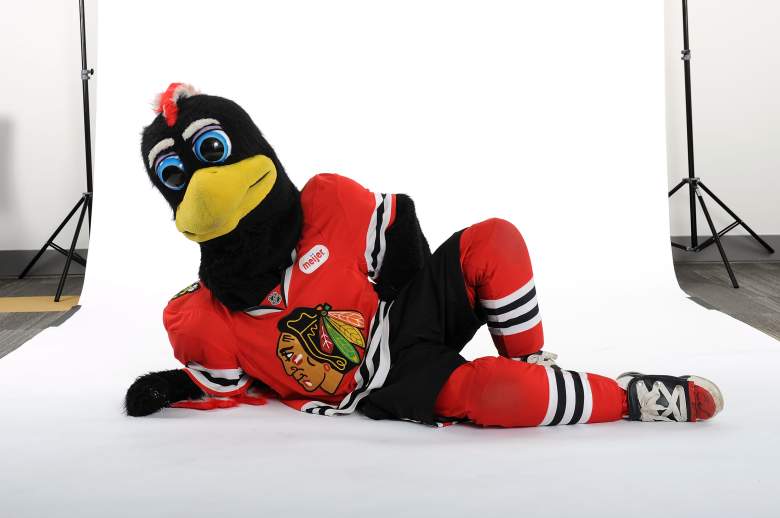 OTTAWA, ON – JANUARY 26: Tommy Hawk, mascot for the Chicago Blackhawks poses for a portrait during 2012 NHL All-Star Weekend at Ottawa Convention Centre on January 26, 2012 in Ottawa, Canada. (Photo by Matt Zambonin/Freestyle Photo/Getty Images)

The Chicago Sun-Times quoted Chicago police, saying that a “male was performing as a team mascot when another man began punching him in the face and put him in a headlock.” The initial attack isn’t shown in the video above, but it is clear that Tommy Hawk was able to break free of the headlock right before bodyslamming the attacker to the ground.

Police were notified about the incident around 11:15, but the fan fled the scene before police arrived. The man who attacked Tommy Hawk is described as a white male between the ages of 18 and 20 and described as being about 5-feet-5 and 160 pounds, according to the Sun-Times. No arrests had been made as of Saturday night.

Twitter users had plenty to say about the fight, joking that Tommy Hawk is a mascot to be reckoned with.

“Tommy Hawk does NOT take shit from anyone!” one user wrote, while another joked: “When you say gritty is better than tommy hawk.”

Tommy Hawk does NOT take shit from ANYONE ??? pic.twitter.com/1ktZF8IBEi

Others claimed that the man who attacked Tommy Hawk tried to “take the mascot’s head off,” but that it was a bad idea since a lot of mascots are in great shape, and wouldn’t hesitate to fight back.

“I have personally watched tommy hawk lift a very large dude up to cradle him in his arms, so I am 100% sure he can kick any bro’s ass,” another user wrote.

I have personally watched tommy hawk lift a very large dude up to cradle him in his arms, so I am 100% sure he can kick any bro’s ass. https://t.co/BGyE4oCKy5

The Blackhawks may suck ass but their mascot Tommy Hawk doesn’t fuck around. Show this to your kiddies if you’re trying to teach them self defense. https://t.co/Mfg9fH0CPM

The Blackhawks finally showing some #heart and #passion in the form of Tommy Hawk dusting some dude in the United Center lobbyhttps://t.co/rLi49wS9Rx

The incident took place during the Jets’ 4-3 overtime win over the Blackhawks on Friday night. The Blackhawks have been having a bleak season so far, according to USA Today. They have the second-fewest points in the NHL and fired longtime coach Joel Quenneville – who guided the team to three Stanley Cup wins –  earlier this season.