Patrick Mahomes’ girlfriend, Brittany Matthews, was decked out in Chiefs gear for the AFC Championship game between Kansas City and New England. Prior to the game, Matthews showed off her new custom jacket featuring Mahomes number along with a photo of their dog Steel. The yellow jacket also featured “Chiefs Kingdom” on the sleeve.

Here’s a look at the photos of the jacket that Matthews posted.

It has been a big week for Matthews and Mahomes. Not only is Mahomes one win away from the Super Bowl, but the couple brought home a new puppy. Silver is a pit bull who just met her older brother Steel this week. Like her mother, Silver was also decked out in Chiefs gear for the big game.

Matthews operates an Instagram page that features photos of their dogs. The page was just Steel but now it has been adjusted to include both Silver and Steel.

As for Mahomes, something tells us he was not too involved with the puppy training as he prepped for the biggest game of his NFL career. Mahomes had a historic season in his first year as the Chiefs starting quarterback, but he admitted he has a ways to go before he can be mentioned in the same sentence as Tom Brady.

“There’s still a long way to go,” Mahomes said per Newsday. “I’m a young guy. He’s done so much in this league and he’s still doing it to this day. He’s going to play for more years to come, so I’m always going to strive to do some of the things that he’s done. He’s not trying to pass the torch anytime soon.”

Mahomes and Matthews are both from Whitehouse, Texas where they started dating in high school. Matthews ended up playing soccer at UT Tyler, while Mahomes played quarterback at Texas Tech.

Mahomes has emerged as one of the top young quarterbacks in the NFL, but those close to him say he is still the same person who grew up in a small Texas town. Mahomes’ mother, Randi Mahomes, elaborated on how her son stays grounded.

“I want him to stay humble; That means a lot to me,” Randi Mahomes told KSHB. “I always encourage him to pray and to thank God for his blessings that he has and his abilities…The moment that makes me the proudest is, whenever he was at Dick’s Sporting Goods the other day, you know, he doesn’t tell me every little thing like that. But, when I see it, it brings tears to my eyes.” 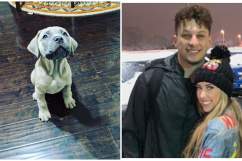