As Tom Brady continues his historic run, his kids are able to appreciate it more as they get older. Tom and his wife, Gisele Bündchen, have two children, Benjamin (9) and Vivian (6), along with Tom’s son, Jack (11), from a previous relationship. Tom spoke about his children being more attentive during games.

“My daughter’s six. She’s a great cheerleader for us,” Brady told WEEI. “My older son is into every play. My middle son is not into any play. It’s perfect. We get to talk about it on the way home. They’re understanding more and more, but they’re still my kids so they don’t care much about Dad. They’d rather hang out with Gronk and Jules and all those other guys.”

Gisele admitted that it took some time for her to adjust to being a mother.

“When I became a mom, I kind of lost myself,” Gisele said per People. “It was like a part of me died. I’d been this very independent person. It was all about me. But now I had this little being, and I suddenly felt l couldn’t do other things and that was very hard for me. All I ever wanted was to be a mom, but when you’re actually experiencing that, it’s a shock.”

Tom and Gisele met through a mutual friend and instantly connected. According to Business Insider, the couple met in 2006, and were married in 2009. TMZ reported Tom proposed on Christmas Eve of 2008 on a private jet. His proposal included four dozen roses and champagne. Gisele’s parents were also present for the proposal.

The couple got married two months later on February 26, 2009. According to Vanity Fair, the wedding was a private ceremony at a Catholic church in Santa Monica, California. They had a small gathering at their Brentwood home after the ceremony.

In an interview with Vanity Fair, Gisele emphasized Tom’s relationship with his parents as one of the things she finds attractive about her husband.

“He’s very close to his family,” Gisele told Vanity Fair. “He’s Catholic. His parents have been married 40 years. He’s got a pure heart. That’s all that matters—he’s got the purest heart. I feel grateful because I have a lot of love in my life. I found the person I’m sharing my life with. I have a good man.”

2. Tom’s Dad, Tom Sr., Went to Counseling After His Son Went to College

Tom’s close relationship with his father, Tom Sr., has impacted his own parenting. Tom Sr. noted the two golfed together when he was in high school. Tom’s father opened up to Boston.com about going to counseling to help him deal with being separated from his son when he went to college at Michigan.

Following Brady’s departure to Ann Arbor, Brady Sr. attended eight weeks of psychological counseling in order to cope with the separation anxiety. He and his wife, Galynn, would go on to attend 90% of Brady’s games while at Michigan, including ones when the quarterback was on the bench.

“I love every minute I can spend with my son,” Brady Sr. said.

3. Gisele Tried to Get Tom’s Former Michigan Teammate Jay Feely to Convince Him to Retire During a 2017 Vacation

Gisele has been vocal about her fear of the toll football takes on Tom’s body. She created a bit of controversy during a CBS interview after saying her husband had sustained multiple concussions, despite Tom not being listed on the injury report for a head injury that season.

Behind the scenes, Gisele’s fears appear to go much deeper as she wants Tom to retire sooner rather than later. According to Sports Illustrated, she encouraged Tom’s friend and former Michigan teammate Jay Feely to try to convince Tom to retire during a 2017 off-season vacation.

“[Gisele was] trying to get me to convince [Tom] to stop playing,” Jay told Sports Illustrated. “She was dead serious. [Jay told Tom]…’Play as long as you can’…For years he wanted to prove he belonged in this league. He won three Super Bowls and still used perceived slights to motivate himself. And he’s still finding ways to motivate himself.”

Gisele has since said she will not get in the way of Tom playing as long as he wants. Even at 41, Tom has expressed a desire to continue playing football.

4. Tom Has Two Sons, Jack & Benjamin, Along With His Daughter, Vivian

Tom and Gisele have two children, Benjamin and Vivian, together. Tom’s oldest son John Edward (who goes by Jack) came from a previous relationship with Bridget Moynahan. The timing was less than ideal as Bridget announced she was pregnant with Tom’s child just as he started dating Gisele. She admitted to Vanity Fair that Jack’s birth caused her to question her new relationship with Tom.

It was definitely a surprise for both of us. In the beginning, you’re living this romantic fantasy; you’re thinking, This can’t be true, it’s so good! And then, Whoops—wake-up call! We were dating two and a half months when he found out, and it was a very challenging situation. Obviously, in the beginning, it’s not the ideal thing…You question at times—‘Should I stay here? Maybe you should work this out.’ But when people break up, it’s for a reason.

5. Tom Calls Himself the Disciplinarian of the Family Except When It Comes to Their Daughter

In an interview with People, Tom called himself the disciplinarian of the family but admitted he has a soft spot for his daughter Vivian.

I think discipline’s important, and typically that’s more the man’s role in the house…I wouldn’t say [I’m] strict, but I’d say disciplined, because there are definitely times when they get over on their dad…It’s too hard [to discipline Vivian]— she’s too cute, and she just says, ‘Dad, please?’ and I say ‘Okay,’ My wife always says, ‘You gotta be tougher on her!’ and I say, ‘I can’t.’ [Vivian]’s, like, half my wife, so you know … that’s just the way it goes.

Tom spoke to ESPN about the difference in his childhood, and how his three children are growing up. Tom enjoyed playing with other kids in the neighborhood but noted this is not a reality for his children thanks to the celebrity status of both of their parents.

“How do you get your kids to understand that this [their childhood] is not the way the rest of the world is?” Tom reflected to ESPN. 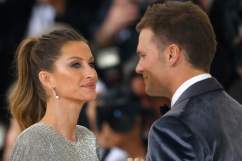