Getty Zion Williamson had his foot go through his Nike shoe.

The Duke-North Carolina matchup had all the makings of being an epic matchup for Nike. Duke is a Nike school while North Carolina is with Nike’s own Jordan Brand. It was the primetime sports event of the night with a number of celebrities in attendance including Barack Obama and Spike Lee. Just seconds into the marquee game, Duke’s Zion Williamson had his foot go through his Nike shoe.

Nike finished the day with their stock selling for $84.84 a share which is up .32 percent, per Yahoo Finance. The big question is what will happen to the Nike stock in the coming days. Action Network’s Darren Rovell tweeted that Nike’s stock could take a temporary hit after the incident.

“It’s not a material loss to Nike’s business, but I wouldn’t be completely surprised if Nike’s stock, on no other news, didn’t do a little dip tomorrow morning from this prominent event,” Rovell tweeted.

Given how many high-profile athletes have successfully worn Nike shoes over the years, it is unlikely to have a major long-term impact on the company. While it appears to be an isolated incident, it could have a negative impact in the short-term given Williamson is currently one of the biggest names in sports. The Duke big man was even talked about during NBA All-Star Weekend. Rovell compared Williamson’s shoes to what happened at the 2015 Berlin Marathon when insoles fell out of running shoes.

“Worst Nike shoe malfunction since Eliud Kipchoge missed a record in the Berlin Marathon in 2015 after the insoles fell out of his shoes. Nike said they were prototypes. Doesn’t compare to the stage that the Zion malfunction was just on,” Rovell tweeted.

Worst Nike shoe malfunction since Eliud Kipchoge missed a record in the Berlin Marathon in 2015 after the insoles fell out of his shoes. Nike said they were prototypes. Doesn’t compare to the stage that the Zion malfunction was just on. pic.twitter.com/WbJyKR2oxU

Not only are there questions about how Nike’s stock will perform, but also whether there could be potential legal implications. Players have limited options in what brand of apparel and shoes they wear. Schools sign contracts with shoe companies and the athletes, like Williamson, are expected to wear the same brand.

“The standard Nike contract covers what happens if a player suffers an injury in Nike shoes, as in how the university should act to do its best to keep that player in Nike shoes, not as in Nike accepting liability…Most Nike contracts waive liability from school. But even though players are required to wear the shoes per the agreement, they are not technically part of the contract so they don’t waive their rights to sue for injury,” Rovell tweeted. 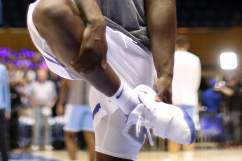