Sean McVay’s girlfriend, Veronika Khomyn, paid the Rams coach a little homage by wearing a unique t-shirt with his likeness during the NFL playoffs. The shirt has the word “McBae” with a heart over it right under a photo of McVay’s face wearing sunglasses.

McVay is a millennial who just turned 33 years old, but he wants nothing to do with social media. McVay’s girlfriend is a different story with more than 41,000 Instagram followers, and she helps the Rams coach keep up with what is going on in the world. Khomyn informed McVay that fans knew about their Southern California home purchase.

“It’s all over TMZ yesterday,” McVay told ESPN. “I closed on a place earlier this week. My girlfriend — she’s on social media, I’m not — she says, ‘You know, it’s everywhere, where we’re living and all that stuff.’”

After the Rams overtime win over the Saints in the NFC Championship, Khomyn posted a video of McVay being hoisted in the air by friends.

Here’s a look at the celebration.

Khomyn has had an up-close look at McVay’s ascension in the NFL. According to TMZ, the couple started dating when McVay was the Redskins tight ends coach. This was before he was promoted to Washington’s offensive coordinator, the role he had when he took the Rams head coaching position.

Khomyn made the cross-country move from Virginia to Los Angeles with McVay. She even helped pack up their old home after McVay’s first few weeks on the job did not allow him to fly back to finish up the house, per Sports Illustrated.

The Couple Hit Up an L.A. Hot Spot After the Rams Playoff Win Over the Cowboys

How do you celebrate your first playoff win as an NFL head coach? McVay hit the town with Khomyn by heading to Delilah, an upscale dinner club in Hollywood. TMZ detailed the night on the town.

Of course, Delilah is one of the HOTTEST spots in Hollywood … but McVay clearly had no problem getting a table for him and his GF, Veronika Khomyn, after a big win.

This ain’t the first time the 32-year-old coaching wunderkind has thrown his weight around in L.A. — the coach was spotted with Veronika at Warwick on New Year’s Eve too!!

Bottom line … seems it’s pretty good to be young AND one of the best coaches in the NFL!!!

Co-owner Brian Toll spoke on the company’s website about the unique design of the restaurant.

“I don’t think LA (or anywhere) has seen a place like this, with the mix of dinner, drinking and dancing all coming together in this format,” Toll noted.

McVay and Khomyn are hoping for one more night out after the Super Bowl. McVay is from Atlanta meaning a Super Bowl win in his hometown would be extra special. The Rams coach is sure to know a few spots to celebrate if they can pull off the upset. 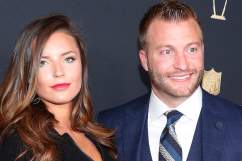