Tottenham forward Harry Kane is a massive NFL fan and went to the Super Bowl with girlfriend Katie Goodland. The couple are massive Patriots fans and posted Instagram photos of their experience cheering on New England. Goodland posted this photo of herself decked out in Patriots gear on the eve of the Super Bowl.

The couple checked out the Vince Lombardi trophy prior to cheering on the Patriots at Mercedes-Benz Stadium.

During an interview with the Daily Telegraph, Kane called Tom Brady a “real inspiration.” Like Brady, Kane had to prove he belonged prior to becoming a top athlete.

“It is a real inspiration,” Kane said, per Bleacher Report. “Seeing how he became the best ever from people doubting him. He was 199th in the draft. 199th! It showed that in sport anything is possible—and in life, too. It gave me huge self-belief and confidence that I was going to make it; I was going to prove myself on the big stage. My career has been quite similar. Hopefully now I can go on and win a few trophies and go down as one of the best strikers in the world.”

Not only did Kane get to go to the Super Bowl, but he met several of the Patriots as well. Kane posted photos with Brady, Julian Edelman and Robert Kraft on Instagram.

“The GOAT @tombrady and MVP @edelman11! Let’s Go!!! ?? #SuperBowl #SBLIII,” Kane posted along with a photo with Brady.

Kane has long been an admirer of Brady. During a lengthy article penned for The Players’ Tribune, Kane discussed watching a Brady documentary about the quarterbacks selected prior to the Patriots signal caller.

Turns out, Tom Brady was the 199th pick in his draft class. Imagine that. It just blew my mind — but in a good way. The film really struck a chord with me. Everyone was doubting Tom his whole life. Even when he got to college the coaches were trying to replace him with another quarterback. They showed this picture of him being weighed by the scouts before the NFL draft, and he’s got his shirt off … and it’s so funny, because he’s just looking like a regular guy, you know? And this one coach says, “We’re looking at this Brady kid, and he’s tall and gangly, and he looks like he’s never even seen a weight room.”

He reminded me of me. People were always making the same assumptions about me. “Well, you know, he doesn’t look like a proper striker…

Thank you to Tom Brady, for giving hope to guys who look like they’ve never seen a weight room in their life.

The Couple Welcomed Their Second Child on August 8, 2018

Our beautiful addition to the family! Vivienne Jane Kane. ? So proud of @kategoodersxx for having the most amazing water birth with no pain relief at all. ??? #mygirls #hypnobirthing

Kane and Goodland recently welcomed their second child to the world. Their daughter Vivienne Jane Kane was born on August 8, 2018 shortly after the World Cup.

“Our beautiful addition to the family! Vivienne Jane Kane. ? So proud of @kategoodersxx for having the most amazing water birth with no pain relief at all. ??? #mygirls #hypnobirthing,” Kane noted on Instagram. 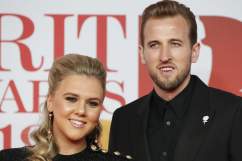