Rory McIlroy married his wife, Erica Stoll, in an elaborate wedding in 2017. The couple tied the knot at Ashford Castle in Ireland. According to E Online, McIlroy and Stoll wedded in April 2017 in front of a star-studded guest list including members of U2 and Coldplay lead singer Chris Martin.

Multiple outlets are reporting that the Irish golfing ace and his American lady love got hitched in a lavish, $250,000 wedding at the 13th century castle with a slew of celebs at their side, including Stevie Wonder, One Direction’s Niall Horan, Ed Sheeran, 50 Shades of Grey actor Jamie Dornan and Coldplay’s Chris Martin.

Wonder is believed to have performed during the newlywed’s nuptials. With hits like “I Just Called To Say I Love You,” “Isn’t She Lovely” and “Signed, Sealed, Delivered,” it’s no wonder why the Motown superstar is on tap for the A-list ceremony.

Later on in the evening, Sheeran reportedly performed a special show for the duo and their guests.

McIlroy noted that the couple wanted to keep the wedding private and celebrate the monumental occasion with friends.

“We want to keep it to ourselves as much as we possibly can,” Rory explained to the Irish Mirror. “Erica loves Ireland. It’s very similar to the place where she grew up, in Rochester, upstate New York, where it’s also very green and leafy.”

The estimated cost of the wedding has varied, but Golf Week reported the number could be as high as $1.2 million.

The cost of the wedding could be around $1.2 million, according to multiple Irish outlets. As these news sources report, the cost of the venue is believed to be around $270,000 and a special marquee tent from Europe is expected to be brought in for around $110,000. A fireworks display expected after Wonder’s performance is estimated at $53,000.

Stoll Worked for the PGA Tour When She Met McIlroy

GettyRory McIlroy pictured with his wife Erica McIlroy prior to the 2018 Ryder Cup Gala.

McIlroy and Stoll met when she worked for the PGA Tour. Stoll prefers to stay out of the limelight and is absent from McIlroy’s social media posts. According to Golf Monthly, Stoll enjoys sailing and watching the show The Bachelor. McIlroy admitted to the Independent that he enjoys being with someone who does not live their life in the celebrity spotlight.

“The thing I love about it, is that we were friends before anything romantic happened,” McIlroy explained to the Independent. “We met when she was working for the PGA of America, and renting a condo in Palm Beach, and I found it refreshing being with someone who was living a normal life rather than, ‘Oh! My jet is 30 minutes late!’ I could speak to her about anything, we ended up spending a bit of time together and realized that there was something more there. I love that she knows everything about me, and there was no judgment there. There was no judgment from day one, which is huge, because that’s very hard to find for someone in my position.” 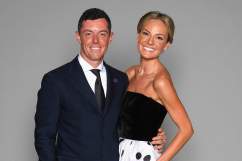