DENVER - APRIL 02: Members of the armed forces march before the Arizona Diamondbacks and the Colorado Rockies face off during Opening Day of Major League Baseball on April 2, 2007 at Coors Field in Denver, Colorado. The Diamondbacks won 8-4. (Photo by Doug Pensinger/Getty Images)

Less than a week after Major League Baseball teams don special pink caps, jerseys, and socks for Mother’s Day 2019, the same will wear special caps and jerseys for another holiday.

Armed Forces Day will be celebrated across MLB on Saturday, May 18. The holiday always falls on the third Saturday in May and is designated to honor active members of the military. In addition to stadium-specific pre-game ceremonies at all MLB stadiums hosting games that day, players and team personnel across the league will wear similar caps and jerseys that are unique for the weekend.

The hats, designed and manufactured by MLB’s official headwear partner New Era, feature a black and green camouflage coloration with the New Era flag logo on the left-hand side of the crown. On the front of the hats are the team logos and the MLB logo adorns the back side of the caps. On the right-hand side of the caps for all United States teams will be five stars, one for each branch of the US military. The Toronto Blue Jays caps will present four maple leaves in place of the five stars, as MLB’s only Canadian team. All logos, leaves, and stars on the caps will be a brighter green with gold outlines. Below is a view of the Chicago Cubs edition. 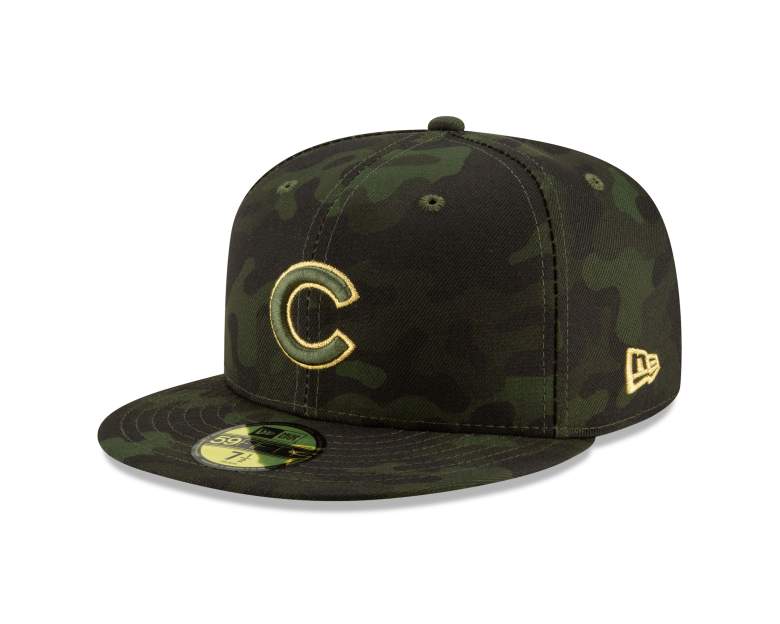 MLBThe Chicago Cubs will wear this hat on Armed Forces Day weekend, which is the third weekend in May every year. Photo courtesy of MLB.

The jerseys will be identical to teams’ regular home/road jerseys with one exception. All the US teams’ jerseys for the weekend will feature a logo on the left-hand side of the chest that is a batter silhouetted in the “stars and stripes.” Toronto will wear a similar patch featuring a silhouette of the Canadian flag.

In addition, players and team personnel have the option to wear special camouflage socks created by MLB’s official sock partner, Stance. Players have the freedom to wear camouflage and/or patriotic batting gloves and sleeves in addition to using special-event bats and fielding gloves as well. Many players have taken advantage of such liberties in the past, so fans should expect to see more of the same in 2019.

Many of the teams will auction off the special-event jerseys and other game-used items after the games are played, so fans who want to get souvenirs will be able to do so. This isn’t the last time during the 2019 season MLB players will wear special uniforms. Father’s Day (June 16), Canada Day (July 1-Toronto Blue Jays only) and Independence Day weekend (July 4-7, US teams only) will also give teams cause to bust out new threads. As is the norm, All-Star weekend and the Futures Game will have special uniforms.

Many baseball fans and players across Canada and the United States are related to or friends with members of the armed forces in one of the two countries. Armed Forces Day is a great opportunity for fans and players alike to honor their service and wear some fantastic new pieces by MLB’s uniform partners as well.