Brooks Koepka and Dustin Johnson’s friendship has been well-documented, but there are rumors of a feud between the two golfers. The Telegraph reported that Koepka and Johnson had to be separated during Ryder Cup festivities back in October of 2018.

Anger among the United States team over their dismal Ryder Cup defeat boiled over in the post-match festivities when their two top-ranked players, Dustin Johnson and Brooks Koepka, had to be ­separated after a flare-up.

So much for this new era of Stars and Stripes camaraderie. Witnesses recounted how the pair almost came to blows after they had been invited into the Europe team room, a few hours after the resounding home success at Le Golf National.

The source of the reported beef is unknown, and Koepka’s representatives denied to Golf Digest that there was an incident.

When reached for comment, Koepka’s representation denied the story. “From what I gather I believe someone made this story up,” said Blake Smith, Koepka’s agent. “Nothing to report on our end.” At the time of this article’s publication, Johnson’s agent has not responded to a request for comment.

Brothers in arms: Hitting the gym with Dustin Johnson and Brooks KoepkaDustin Johnson and Brooks Koepka are two of the best-conditioned players on tour, and their trainer believes it is no coincidence that their work has translated into titles. Read more here: golf.com/tour-news/2018/05/01/15-numbers-you-need-know-about-us-golf-economy Subscribe for more GOLF videos: youtube.com/subscription_center?add_user=golfmagazine Connect with GOLF online: Site: golf.com Facebook: facebook.com/golf/ Twitter: twitter.com/golf_com Youtube: youtube.com/user/GolfMagazine GOLF.com is the biggest digital…2018-05-11T15:56:18.000Z

Koepka has repeatedly denied the incident occurred. The two golfers were seen chatting it up during the practice round on the second day of the Masters.

“There’s a lot of lies that came out of that Ryder Cup, we’ll put it that way,” Koepka told Boomer and Gio, per Golf Magic. “There’s a lot of untruth, untruthful statements that have been said about that. The stuff with me and DJ, you saw that. I mean, if we really got in a fight, one of us would have had a black eye, I promise you.”

Although Koepka’s representation has refuted this story, sources have confirmed to Golf Digest that an altercation did take place…

Specifically what happened to cause Johnson and Koepka to be separated is unclear. A source told Golf Digest that Paulina Gretzky, Johnson’s fiancee, was a central figure in the incident. Koepka’s girlfriend, Jena Sims, was also involved.

Koepka initially refuted the report at an October press conference, per ESPN.

“This Dustin thing I don’t get,” Koepka noted, per ESPN. “There is no fight, no argument, he’s one of my best friends. I love the kid to death and we talked on the phone Monday and yesterday and he told me how he thought. People like to make a story and run with it. It’s not the first time there’s been a news story that isn’t true that has gone out. As far as the camaraderie [within the U.S. Ryder Cup team] it was fine, it was perfect. The problem is you guys try to find a reason why we lost and the simple reason is we didn’t play good.” 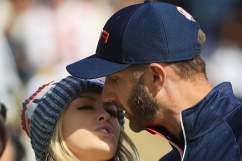 Dustin Johnson & Girlfriend Paulina Gretzky Are Back to Normal in 2019

Read More
Golf, Masters Tournament, PGA Tour
Brooks Kopeka and Dustin Johnson were reportedly involved in an altercation at the Ryder Cup. Find out the details and why Koepka has denied there is any beef.