Getty The Cleveland Browns are expected to take on the New York Jets to kickoff the season.

The NFL schedule will officially be released tonight at 8 p.m. Eastern on NFL Network. NFL schedule leaks have already begun to infiltrate the internet, but it is important to approach the information with skepticism until the official release.

Green Bay and Chicago will kick off the season on Thursday, September 5th, per NFL. The league also announced the five international games for this season. Here is a look at the latest schedule leaks and updates for the 2019 NFL season.

The Patriots vs. Steelers Will Be the Week 1 Sunday Night Football Game

The #Patriots will open the 2019 season on Sunday Night Football against the #Steelers, per source.

CLNS Media’s Evan Lazar reported that the Patriots-Steelers will be the first Sunday Night Football game of the season. The game will take place on September 8th at Foxborough.

According to NOLA.com, the Saints will travel to Atlanta on Thanksgiving for a primetime rivalry showdown. The game would be at 8:30 p.m. Eastern on NBC. The two teams played last season as the Saints came away with a blowout win in New Orleans.

Here is a look at the rumored NFL schedule for Week 1.

The Patriots are among the teams that had their full schedule reportedly leaked. The above schedule is the leaked version. New England will play five primetime games, per The Athletic’s Nick Underhill. Here is a rundown of the Patriots primetime games: vs. Steelers (September 8), vs. Giants (October 10), at Jets (October 21), at Ravens (November 3) and at Texans (December 1).

The Bears are Rumored to Play the Lions on Thanksgiving

“Word is #Bears will play at #Lions on Thanksgiving again this year. Nov. 28 at Ford Field,” Biggs tweeted.

Odell Beckham Jr. Hinted the Browns Will Play the Jets in Week 1

Many are speculating the Browns will open up the season against the Jets on Monday Night Football. Odell Beckham Jr. tweeted out this info on the schedule.

Rumor: Packers to Host the Broncos in Week 3

The latest rumors have the Packers hosting the Broncos in Week 3 in a cross-conference showdown. 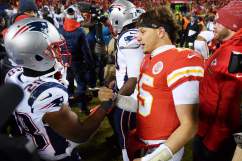 Read More
Football, NFL
Find out the latest NFL schedule leaks, updates and rumors as we head into the 2019 season.