Tony Finau’s wife, Alayna Galea’i-Finau, was in Augusta this week to cheer on her husband. Tony surged up the Masters leaderboard on Saturday and has had a much better week than 2018. Tony dislocated his ankle during last year’s Par 3 Contest but was still able to finish T-10 as the golfer played through pain. Alayna posted photos on Instagram from this year’s Par 3 Contest where no one was injured.

“The Finau Littles are grateful to be back & ready to get their caddy on tomorrow! ?? #GoDad #CalmCelebrationsOnly #TheMasters #Par3contest,” Alayna posted.

Tony and Alayna have four kids: Jraice, Leilene, Tony and Sage. According to the Deseret News, Tony is the first golfer of the Tongan and Samoan ethnicity to compete on the PGA Tour. Tony was born in Salt Lake City, Utah and resides with his family in Lehi, Utah.

“It’s really an honor for me to represent my people at the level that I am,” Tony told the Desert News. “I think the Polynesian people and the gospel are in harmony. We’re very respectful people, and very humble people … and I try and let that shine through as much as possible.”

My Babies smiles & excitement, ? makes my heart the Happiest! ?

Tony and Alayna share a bond thanks to their Mormon faith. When people have questions about Finau’s religion, the golfer is happy to answer.

“I hear people say things like, ‘Oh, wow, I wouldn’t think that you’re a member or Mormon, or anything like that,” Finau explained to Deseret News. “Some people hear different things about Mormons and what we do, what we believe,” he said. “So, I think it’s a compliment to me.”

Tony is a newcomer to the PGA Tour and admitted it was difficult when the golfer was trying to climb the ranks.

“When I finally got through, I knew the opportunities and the window for getting to the PGA TOUR and competing at a high level was finally available to me,” Tony noted to Reuters. “Those six years were tough. Mini-tour life isn’t a glamorous life, professional golf life. If you’re not on the PGA Tour, it is very tough financially. I was married, and my wife and I had our oldest son already. So those were some tough times.”

One of the greatest joys in my life thus far! To witness Tony fulfill one of his life-long dreams ✨✨ ✅ Make a Ryder cup team I am FOREVER PROUD! Keep inspiring. I Love you! @tonyfinaugolf ?❤️ #TeamUSA #KeepOnKeepingOn #TeamFinau

Not only did Finau make the PGA Tour, but he was named to the 2018 Ryder Cup team. It was an honor that recognized Finau as one of the top golfers in the United States. Alayna took to Instagram to give her husband a shoutout for the accomplishment.

“One of the greatest joys in my life thus far! To witness Tony fulfill one of his life-long dreams ✨✨ ✅ Make a Ryder cup team
I am FOREVER PROUD! Keep inspiring. I Love you! @tonyfinaugolf ?❤️ #TeamUSA #KeepOnKeepingOn #TeamFinau,” Alayna posted on Instagram. 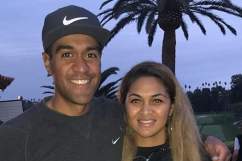