Getty Bob Baffert pictured with his wife, Jill Baffert at the 2018 Kentucky Oaks.

Bob Baffert’s wife, Jill Baffert, has quite the resume, but her biggest accomplishment may have been helping their son, Bode, dress up like the legendary horse trainer. Jill took a mullet wig to her husband’s stylist to get his white hair just right for their son’s Halloween costume, per ESPN.

The frames inside his barnside Santa Anita office are so numerous that they bump up against one another, housing photos of the trainer being hugged by Jill, his wife, mid-victory roar; or being impersonated on Halloween by his adolescent son, who wears a mullet wig that Jill took to Baffert’s stylist to replicate his signature white side sweep.

The couple initially met at the 1998 Kentucky Derby when Jill was hosting a television show from Churchill Downs. Now, her life revolves around horse racing. When jockey Mike Smith opted to ride a non-Baffert horse in the 2019 Kentucky Derby, Bob noted he might have to deal with his wife.

Mike was Justify’s jockey when he teamed up with Bob to be part of a 2018 Triple Crown team. This year, Mike opted to ride Omaha Beach instead of Roadster, one of three Kentucky Derby horses trained by Bob. He joked that he was okay with the decision, but Mike may need to make peace with Jill.

The Baffert family is a bit superstitious. According to WWD, Jill refuses to buy a new outfit before it is confirmed that they have a horse in the field. They also do not make celebration plans before the race.

“We don’t want to say we’ll be celebrating so we just have people on standby,” Jill noted to WWD. “Bob will say, ‘If we win I’m going to come in with 18 people.’ Usually, they’ll accommodate us.”

Jill spoke with WWD prior to the 2018 Belmont Stakes where Justify went on to win.

A friend who works in Chanel’s Rodeo Drive store suggested to Jill Baffert a white Chanel dress with a gold belt for the Belmont Stakes. Having only bought the frock seven days ago, Baffert said, “It’s superstitious, as my grandmother would have said, ‘Don’t count your chickens before they hatch.’ I want to make sure, ‘OK, we’re definitely going and the horse is…’ before I do that. I don’t want to tempt fate. I know it’s silly.” 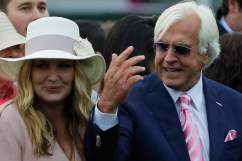