Brooks Koepka's girlfriend clearly saw y'all's comments about not getting a kiss before the round. pic.twitter.com/gMSJPxqx0d

Brooks Koepka’s girlfriend, Jena Sims, just wanted a kiss on the final day of the PGA Championship. The day started with Sims and Koepka being part of a viral video after the golfer appeared to reject her attempt at a kiss prior to the final round. Sims finally got her kiss after Koepka won his second straight PGA Championship.

Sims had to endure a day that was much more nerve-wracking than it was originally expected to be. Koepka entered the final round with a sizable lead on the field, but good friend Dustin Johnson chased him down to make for a compelling end. Prior to the round, Sims noted to Golf.com that she normally does not feel pressure on behalf of her boyfriend.

“I really don’t get that stressed [watching Brooks] because I’m not out there swinging a club,” Sims noted to Golf.com. “I’m just enjoying myself. I’m here for him. At this point, he’s so far ahead, I’m just enjoying watching him play.”

Sims’ nerves during the final 18 holes may have been a little shakier than normal as Koepka was at risk of losing his lead. Heading into the final day, Sims did not plan on walking the entire green like she does during some rounds.

“I might not walk tomorrow,” Sims said, per Golf.com. “I’ll probably just chill in family dining and watch it on TV with [Koepka’s] agent [Blake Smith]. We have a good time together.”

Lady and the Champ ??

Koepka’s laser-focus finally subsided after four days of stellar play at Bethpage. After hugging his parents, Koepka found Sims to celebrate another major victory with a kiss. Sims was recently asked one thing fans may not know about the PGA Championship winner. Sims emphasized how much Koepka loves to get dressed up.

“Oh, here’s a good thing: He loooves to get dressed up,” Sims noted to Golf Digest. “He would never admit it. But he doesn’t get too many opportunities to dress up, so when he does, he loves it. He loves wearing a suit. We went to the ESPYs together, and we went to a Rolex party recently, and he just felt so cool in his suit. You never think about that, because he’s always wearing his Nike gear. And when we’re going to dinner, just wearing a V-neck feels like dressing up for him. But he has so many suits and he loves wearing them.”

Jena Sims Is an Actress & Model

Sims does a little bit of everything including acting and modeling. She has appeared in a number of different films and shows including Entourage and Sharknado. Sims also runs her own non-profit called Pageant of Love. If that was not enough, Sims also has a house in the Bahamas that she runs as an Airbnb.

Sims and Koepka initially met at the 2015 Masters. 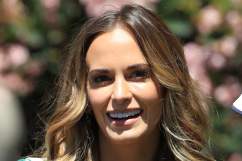