Getty Brooks Koepka is noticeably thinner than he was during the 2018 majors.

Brooks Koepka is listed at 6’0″ while weighing 205 pounds, but the golfer lost 24 pounds since last November, the Golf Channel reported in March. Koepka noted that he weighed 190 pounds and was down from 212 pounds.

“When you go from 212 pounds to 190, there’s not as much weight going forward through the ball,” Koepka told Golf Channel. “I don’t have as much feel. I just feel out of sorts.”

Koepka’s diet may have been a bit extreme as he admitted to trying to limit himself to 1,800 calories a day. The reason for the weight loss is still unclear, but many have speculated that the golfer wanted to drop a few pounds ahead of his potential appearance in the ESPN the Magazine Body Issue.

Koepka has admitted to wanting to lose weight, but failed to get into specifics. The golfer noted he had to get blood work done to see how to rectify things.

“Just had a bunch of blood work and trying to figure out what was going on,” Koepka noted to Golf Week. “The diet I was on was probably not the best.”

Some including golf analyst Brandel Chamblee criticized Koepka’s weight loss, but Koepka noted he cannot win with some people.

“I lift too many weights, and I’m too big to play golf,” Koepka responded, per Golf Channel. “And then when I lose weight, I’m too small. I’m going to make me happy. I don’t care what anyone else says…I’m doing it for me, and obviously it seems to work.”

Koepka Has Been Outspoken About His Diet & Exercise Routine

Prior to the weight loss, Koepka had been outspoken about his diet and exercise routine. It was not uncommon for Koepka to lift weights on the day of a tournament. From the sound of recent interviews, Koepka may have cut down on weight training as he attempted to lose weight.

Koepka spoke with Men’s Health in 2018 about his diet and fitness regimen. It is important to note that Koepka has likely made tweaks to both since dropping more than 20 pounds.

“In an average day, I’m spending about four to five hours just on my body,” Koepka told Men’s Health. “I think any professional athlete has to (take care of their body)…Whenever someone says that increased strength makes you less flexible, I always point out gymnasts. They’re all incredibly strong, and obviously extremely flexible. It’s all about how you take care of your body.”

As for Koepka’s diet, the golfer noted he travels with a chef to try to maintain a healthy lifestyle.

“I know it sounds weird, but I travel with a chef,” Koepka told Men’s Health. “He cooks me really healthy meals.”

Koepka Plans to Add Back Some of the Weight He Lost

GettyBrooks Koepka pictured at the Masters compared to the 2018 US Open.

Koepka told Golf Channel in March that his new routine involves “double of everything”, and it sounds like his cardio may have been ratcheted up. The golfer noted he planned to add back weight.

“I just want to be able to eat again,” Koepka noted to Golf Channel. “I’m going to put it back on. I just want to eat normal and not train as hard. Everything has been double the intensity, double the time.”

Koepka admitted that he realized that his calorie intake became too low during the process.

“I was like 1,800 calories a day,” Koepka said, per USA Today. “I mean, you’re not going to be in the best physical shape at that point. You look at somebody like Michael Phelps or somebody like that eating 6,000 or 7,000 calories by lunch time. But I wanted to do it and try to lose some weight, and maybe went about it a little too aggressively for just a long period of time and the intensity of what I was doing.” 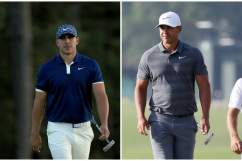