Improbable has the backing of top trainer Bob Baffert. The horse headed into Churchill Downs as one of the top contenders. Irad Ortiz Jr. is Improbable’s jockey and is under the ownership trio of WinStar Farm, China Horse Club International and Starlight Racing. This is the same ownership group that had Justify, who won the Triple Crown in 2018.

Improbable was purchased for $200,000 at the 2017 Keeneland September yearling sale and was sold at $110,000 as a weanling, per America’s Best Racing. Improbable’s pedigree includes sire City Zip and dam Rare Event, the winner of four races. Courier-Journal detailed the story behind Improbable’s name.

Elliott Walden of co-owner WinStar Farm says the farm likes to use strong, one-word names for its horses. This one is an homage to Improbable’s dam, Rare Event. “What is a rare event? Improbable,” Walden explained.

Ortiz is 26 and originally from Puerto Rico. The 2019 Kentucky Derby marks Ortiz’s fourth ride at Churchill Downs. According to Blood Horse, Ortiz won an ESPY for the best jockey in America and the Eclipse Award recognizing the top rider in North America. He is also the brother of notable jockey Jose Ortiz.

WinStar Farm, China Horse Club and Starlight Racing is the same ownership group that backed Triple Crown winner Justify in 2018. It has become more common for horses to have large ownership groups and even several sizable organizations like Improbable does. This helps lessen both the risk and cost associated with the horse. It also allows groups to invest in multiple horses rather than just one.

Kenny Troutt is the owner of WinStar Farm located in Versailles, Kentucky. Teo Ah Khing is the chairman of China Horse Club but the group is made up of multiple owners. According to the China Horse Club website, the team has won more than 450 races in 13 different countries over the last six years.

Jack and Laurie Wolf are the principal owners of Starlight Racing. The team has been part of nine Kentucky Derby horses including Justify and Audible in 2018, who both placed first and third respectively.

Baffert has five Kentucky Derby wins on his resume including two recent victories in 2015 and 2018. These also happen to be the same years his horse went on to win the Triple Crown. Improbable is one of three horses in the Kentucky Derby trained by Baffert.

“He [Improbable] loves this track,” Baffert noted to Blood Horse. “He gets over it well. He’s not really big, but he jumps a long way. … He has gears. He can just get you right there. I think Irad Ortiz is going to be happy with him.”

Baffert believes Improbable is one of the top contenders at Churchill Downs.

“There are pretty good horses going around there,” Baffert told Kentucky.com. “That’s what happens in all these prep races, they start separating themselves, and those two [Omaha Beach and Improbable] separated themselves out there. We’re just fortunate to be in there, and really fortunate with Improbable, because they could have scratched him in the gate. I thought they could have scratched him. It looked like he was trying to sit down, and that could have been a disaster for him.” 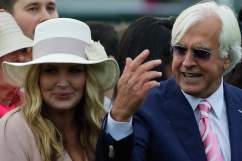