Getty Jockey Mike Smith and trainer Bob Baffert are reunited again with Improbable at the Preakness.

Improbable’s jockey Mike Smith is reunited with longtime trainer Bob Baffert at the Preakness. Smith and Baffert teamed up in 2018 to win the Triple Crown with Justify. Smith originally chose to ride Omaha Beach in the Kentucky Derby over Roadster, one of three horses trained by Baffert at the 2019 race.

Omaha Beach ended up getting scratched just days before the big race, and Smith found a late ride with Cutting Humor. Smith is once again teaming up with Baffert on Improbable. The move means Irad Ortiz will no longer be on the saddle for Baffert, but the jockey did find another horse with Bourbon War. Smith already has two Preakness wins on his resume.

“It’s nothing against Irad. He rode him great in the Derby,” co-owner Elliot Walden told the Associated Press. “It came down to a simple thing: Bob Baffert’s had good luck with Mike Smith. Bob’s kind of a karma guy.”

Longtime trainer Wayne Lukas understands why Improbable is the favorite heading into the Preakness.

“You’ve got Mike Smith at this point in his career picking up all the best horses all around,” Lukas told the Associated Press. “Mike picked up Omaha Beach, who probably would have been the favorite in the Derby, then he jumps back to Baffert because the favorite is here. He’s having a fairytale ride.”

It will be Smith’s first time riding Improbable, but the jockey believes the horse still has his best race left in him.

“I certainly think that we haven’t seen his best race, yet, although he’s shown signs of brilliance at different times,” Smith noted to the Pasadena Star-News. “I just have to get on him for the first time, which sometimes works well for me, get him to run one of those A-plus races. He’s not without a huge chance of winning the whole thing. I was talking to Bob, and he said to me (Improbable) came out (of the Derby) with really good energy. He came out of the race the best of his three, and he wanted to move forward with him. I was blessed to pick up the mount. We’ll see what happens.”

Thanks to Maximum Security’s disqualification at Churchill Downs, Improbable finished fourth at the Kentucky Derby. It was still a disappointing finish for one of the favorites heading into the marquee race. Baffert’s horse once again finds himself as the favorite heading into Pimlico.

Baffert is tied for the most Preakness wins by a trainer and can sit alone at the top with his eighth win. Baffert is not counting on the victory just yet.

“I just inherited it, I think,’’ Baffert explained to Philly.com. “But I wouldn’t say he’s a heavy, heavy favorite. It’s still wide open. Improbable still needs to get away (from the gate). For some reason, the first 100 yards, he scrambles a little bit. For a horse with as much natural speed as he has, it takes him a while to get going. In the Derby, he was right behind those horses and when Maximum Security slowed it down (on the backstretch), everybody was bottled up behind. It was one of those things where he was fifth and stayed fifth the whole way, there was no moving.” 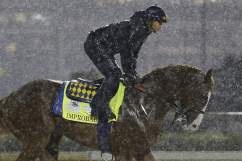