Getty James Harden has a red spot on his eye from a bruised retina.

Draymond Green cannot stop poking James Harden in the eye. Not only did Green poke both of Harden’s eyes in Game 2, but the Warriors big man also hit him again in the eye in Game 3 as the video below shows.

The red spot on Harden’s eye is from Green initially hitting him in the face in Game 2. The star guard looked much better in Game 3 than he did after initially suffering the injury. Harden had to leave during the first quarter of the game but later returned to play.

He spent the majority of Game 2 wincing and looked like he could not see the basket clearly. Here is a look at the play from Game 2 that caused the injury to Harden’s eyes.

ESPN’s Lisa Salters reported that doctors were surprised Harden was able to finish Game 2 given the severity of the injuries. Salters noted Harden sustained a bruised retina in both eyes.

“I could barely see,” Harden explained to USA Today after Game 2. “I just tried to go out there and do what I can to help my teammates. It is pretty blurry right now. Hopefully it gets better day by day…I couldn’t see nothing. I barely could see. They put a couple of drops in to help it and numb it a little bit. All the lights were blurry.”

Harden admitted after Game 3 that he was able to see better.

Draymond Green Noted the Play Was an Accident

After the play, Green was seen apologizing to Harden as he left the game to receive medical care. Green noted after the game that the play was unintentional.

“I made a mistake and hit him in his eye,” Green noted to USA Today. “It’s not about hurting anybody out here. So many times, people forget that when a guy has an injury, you live with that every day, every second of every day. It is not just about the game.”

Yahoo Sports Chris Haynes reported that there was still a portion of the Warriors team that did not believe Harden’s injury was as severe as he was making it out to be during Game 2.

“There are some players in that (Warriors) locker room that are not buying the whole James Harden eye being extremely hurt thing,” Haynes said, per Clutch Sports. “They were talking about some of the shots he was shooting during the game then when he goes to the free throw line and squinting like he can’t see.”

“Considering how they still look, were your eyes affecting you or bothering you at all tonight?” a reporter asked him.

So Chris Paul stepped in to help.

“You look crazy,” Paul told a straight-faced Harden. “We love you, though.”

Harden’s eye even made SNL as Adam Sandler incorporated the Rockets All-Star into his song.

A little NBA on SNL… pic.twitter.com/PQ5eyyst9z 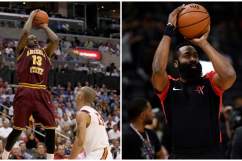 James Harden Without a Beard [PHOTOS]