Getty Kawhi Leonard's family has been by his side through all the ups and downs.

Kawhi Leonard is not much for words, but his actions tell us his family comes first. Kawhi’s dad, Mark Leonard, was murdered in 2008 at his car wash in Compton, California. Kawhi’s mom, Kim Robertson, worried about how his dad’s death would impact his life.

“I really didn’t see Kawhi suffer from it,” Kim explained to ESPN. “I wanted him to. I would say, ‘Kawhi, you OK? You OK?’ But I think he just kept it in. I was kind of scared. You know how young men, they lose their father, who is a big figure in their life. It might turn them to do things bad. But Kawhi’s always been strong. He’s a good kid. He wants to get better and better.”

Mark was working at the car wash he owned and trying to get out early to watch his son play basketball when the tragedy occurred, per ESPN.

They played basketball together, trained together, hung out all the time. Mark Leonard owned a car wash and would take his son to work all the time. On the night he was murdered, he was at that car wash, trying to get off work in time to watch Kawhi’s game that night.

NBA fans may know the name Uncle Dennis as he was mentioned frequently when Kawhi’s relationship with the Spurs deteriorated. Few people know what happened behind the scenes that led to San Antonio eventually trading Kawhi to Toronto, but what we do know is that Dennis Robertson has played an integral role in the NBA player’s life since the death of his father. Kawhi noted that his uncle is someone he can lean on for advice.

“With my dad passing away, there aren’t too many men in the family and he’s a great guy to just talk to that has been through my experiences at my age,” Kawhi explained to the San Antonio Express-News. “He’s just been through life already; good guy to talk to.”

Dennis noted that he tried to help Kawhi in any way he could after the death of his father.

“Our family has always been close,” Dennis told the San Antonio Express-News. “It didn’t change the way I looked at things. I was happy to be there so my sister wouldn’t have to go through that process.”

Kawhi’s Mom, Kim, Made Headlines When She Got Into an Argument With a Spurs Fan

Kawhi’s mom was ready for all the smoke from Spurs fans ?

Things turned ugly when Kawhi made his return to San Antonio as a member of the Raptors. A video of Kawhi’s mom yelling at a heckler went viral. It is unclear what the fan was yelling, but Kim can be heard telling him to “shut up” in the video. Kawhi is close to his mom and tries to lean on her wisdom.

“My mom, she’s been (this age) before,” Kawhi noted to the San Antonio Express-News. “She’s been through this life cycle. I definitely try to use her knowledge and her wisdom to help me in my day of life.” 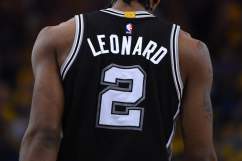