Smashing records, a player's player, & a fan's player! ?⚽?
No matter who you support, everyone loves @MoSalah ?

Mo Salah is one of the best soccer players in the world, but to his wife, Magi Salah, his most important titles are husband and dad. Mo and Magi have been married since 2013 and have one child together, Makka. Mo’s wife and daughter stole the show when the Liverpool striker won the 2018 Golden Boot.

Heading into the final day of play, Mo is the favorite to once again win the award for the most goals. It will be interesting to see if Magi and Makka once again make an appearance if he is the 2019 Golden Boot winner.

The couple are devout Muslims and are proud of their faith. According to Tribuna, their daughter is named after the Muslim Holy City and site of the first revelation of the Quran. Salah also incorporates his faith into his celebrations after goals. Author Khaled Beydoun believes Salah’s personality can help with Islamophobia.

“I think part of Salah’s charm is that he’s not an outwardly political figure addressing Islamophobia in England,” Beydoun explained to The New Yorker. “He is able to effectively erode negative views of Muslims and challenge Islamophobia [just by being himself].”

From time to time, Mo provides fans with a look inside his family life through social media. Mo posted this video with his daughter along with the caption: “A rising star.”

Mo Salah’s Wife, Magi, Was in Attendance for Liverpool’s Epic Comeback Against Barcelona in the Champions League

Find someone who looks at you the way Mo Salah looks at his wife #LIVBAR pic.twitter.com/0xQbq2Mw4i

“Find someone who looks at you the way Mo Salah looks at his wife #LIVBAR,” Leyla Rose tweeted.

Another fan was touched by Magi wearing her hijab.

“Just to see him and his wife wear muslim hijab says it all. Respect to Salah and his wife for showing themselves in public with hijab now during ramadan,” the fan tweeted.

Salah Has Been Outspoken About Gender Equality

Time named Mo as one of The 100 Most Influential People in the World. During his interview for the feature, Mo stressed the importance of gender equality and fighting for women’s rights.

“I think we need to change the way we treat women in our culture,” Salah said, per CNN. “It’s not optional. I support the woman more than I did before, because I feel like she deserves more than what they give her now, at the moment.”

Mo is originally from Nagrig, Egypt. The Liverpool star spoke about what it is like to have the platform as one of the most famous soccer players in the world.

“To be the first Egyptian in [this] situation and no one has done this before … it’s something different,” Mo noted, per CNN. 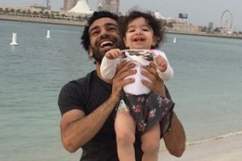