The 2019 FIFA Women’s World Cup in France is still over a month away, but the chances for fans to get closer to the United States Women’s National Team are already ramping up.

As part of Coca-Cola’s Believe wristband promotion, 20 girls from the Orlando City Youth Soccer Players side got to spend an hour with USWNT stars Alex Morgan, Crystal Dunn, and Kelley O’Hara on Monday, April 29. The youth got their own wristbands as well as presented the trio of USWNT players with their own. 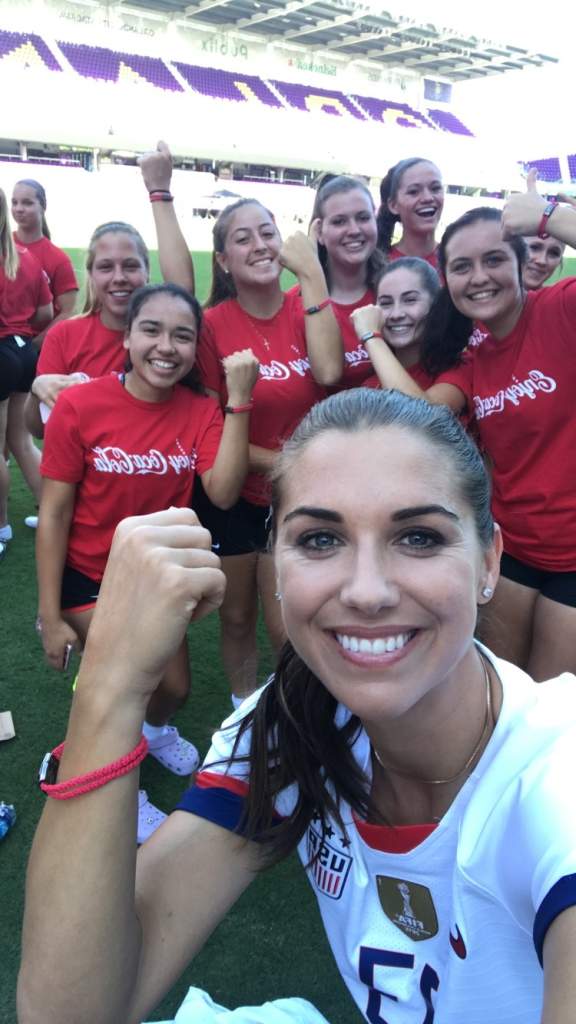 The Zeno GroupUSWNT and Orlando Pride forward Alex Morgan poses for a picture with several members of the Orlando City Youth Soccer Players. Photo courtesy of the Zeno Group.

The wristbands, which are made from parts of the nets used at the 2019 SheBelieves Cup in Orlando earlier this year, are going to be given away by the USWNT and are also available to fans who scan a special logo on 20. oz Coca-Cola bottles with their mobile devices. Only 5,000 of the wristbands will be distributed.

The 2019 Women’s World Cup is scheduled to begin on Friday, June 7, with matches of the group stage set to be played in several French venues. The 24 national teams which qualified are split into six groups of four, of which the top two teams in each will advance to the knockout round. The USWNT is part of Group F, which includes Chile, Sweden, and Thailand. The USWNT will play Thailand on Tuesday, June 11 in Reims, Chile on Sunday, June 16 in Paris, and Sweden on Thursday, June 20 in Le Havre. The USWNT will be looking to defend its 2015 championship, having defeated Japan 5-2 in the final that year. The USWNT has won three of the seven Women’s World Cup tournaments to date.

This will be the third World Cup for Morgan, who was part of the championship side in 2015. Morgan, who is a co-captain of the USWNT, is also an Olympic gold medalist. The 29-year-old has been one of the most vocal advocates for increased compensation for women from the US Soccer Federation.

Dunn, a defender when she plays for the USWNT, will be playing in her first World Cup. Dunn also plays for the NWSL’s North Carolina Courage, where she is a winger. Dunn has spent parts of her professional career playing for Chelsea (England) FC, and the 26-year-old has been an advocate for balance in the lives of young athletes between sport and other responsibilities.

O’Hara also plays in the backfield for the USWNT. The 30-year-old was a teammate of Morgan’s in 2015 and also was part of the championship side in 2012. O’Hara matches Morgan’s accomplishment as an Olympic gold medalist as well. O’Hara has built up quite a reputation in the NWSL as well, currently playing for Utah Royals FC as one of the best outside backs in the game.

When the USWNT first takes the pitch in France on June 11, these three women and their teammates will step onto the field as the heavy favorites to retain the cup. If they do so, they will have rewarded fans’ belief in them.