Steph Curry’s wife, Ayesha Curry, is launching a new show called Family Food Fight on ABC. Ayesha announced on Instagram that the show will debut on Thursday, June 20th at 9 p.m. Eastern. It is the latest television show for Ayesha who had her own show on Food Network.

Back in 2017, ABC named Ayesha as the new co-host of The Great American Baking Show, but the show was canceled just a few months after the announcement as a result of one of the judges being accused of sexual misconduct, per BET.com. Ayesha posted about her excitement in an April Instagram post where she noted there were “no words” for how excited she was for the new show.

There are no words to describe how excited I am for you all to see this show! To watch it all come together from set concepts, casting, challenge creation, filming to now see it ready to go for all to enjoy has been such a joy and a journey. Thank you to all of the production team, my amazing cast mates @catcora and @grahamelliot and to @abcnetwork for believing in our vision. And of course the incredible families this season. No matter where you come from, what you do or what you believe in, food is simply a language of LOVE and a vessel for strong family relationships. The dinner table is something truly special. Tune in Thursday nights at 9pm starting June 20th on @abcnetwork … let’s have some fun. LET THE FOOD FIGHT BEGIN! ??????? @foodfightabc #yardiegirlproductions

Ayesha Curry’s Other Business Ventures Include Her Restaurant International Smoke

Want some of yo brown sugaaaaaaaa ?. @foodfightabc on @abcnetwork airs in just 16 days ahhhhhhh! What are your pantry must haves?

Ayesha is passionate about all things food related and has created her own business empire through a number of different ventures. Ayesha is involved in everything from her own cookware line to starting her own restaurant with Chef Michael Mina called International Smoke. The restaurant started in San Francisco and now has three locations. International Smoke focuses on how barbecue is prepared all over the world, and Ayesha spoke about the inspiration behind the restaurant on its website.

My diversity is reflected in the way that I cook. Grilling is the perfect way to experiment and taste different flavors, cuts of meat, and styles of cooking. They all have one thing in common: that delicious taste is reminiscent of an outdoor family gathering! It just doesn’t get any better.

“Could you imagine the unimaginable?!” Feeling blessed beyond measure.

Earlier in the playoffs, Ayesha was criticized by some fans for comments she made during an interview with Jada Pickett-Smith. Ayesha opened up about the challenges of being married to a celebrity and her own insecurities about receiving “male attention.” Steph backed up his wife via a post to his Instagram Story.

“Proud of you for being authentic and putting yourself out there- not being afraid of the potential bull s#*# and nonsense that could and did come at you. Way more positive than negative with all of this. Keep being you. I love you,” Steph explained on Instagram. 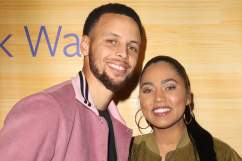