Gary Woodland’s wife, Gabby Granado Woodland, is pregnant with twins who are due in August Fox reported during the 2019 U.S. Open. It is a redemption story for the couple that lost one of their twin babies during 2017 pregnancy. The U.S. Open provided a fitting ending for the golfer on Father’s Day as the couple plans for two new additions to the family.

The couple’s son survived the pregnancy but was born 10 weeks premature. Jaxson, which the couple refers to as Jax, is now about to turn two years old and is fully healthy. Gary announced the news of their baby’s death via a statement during Gabby’s pregnancy in 2017, per Golf Digest.

Happy birthday to this hot momma. Thanks for putting up with me and Jax

During a speech Gary delivered upon his induction into the Topeka Hall of Fame, the golfer praised his wife for her support. Gary alluded to the tragedy that the couple endured and noted she taught him about “family and strength and fighting,” per CJ Online.

I do want to thank a couple special people in my life that are here tonight and have really helped me get to where I’m at today, and that starts with my wife who is my rock. She has the responsibility now of dealing with me on a daily basis; she has to deal with my good rounds and when I’m happy and when I’m power-pouting after my bad rounds. She has to deal with that roller coaster. She’s taught me more over the last 14 weeks about family and strength and fighting, dealing with the pregnancy we’ve been dealing with. I can’t thank her enough; I love her to death.

Gary recently wished his wife a happy birthday on Instagram.

“Happy birthday to this hot momma. Thanks for putting up with me and Jax,” Gary posted.

After a brief stint playing Division II basketball in Topeka, Gary transferred to Kansas to play golf. The golfer is a diehard Jayhawks fans but the only problem is Gabby went to Baylor. Gary admitted on Instagram that he is trying to get his wife on board with Rock Chalk Jayhawk.

“They say marriage is about compromising so I’m glad @gabby_woodland realizes we only root for Kansas even though she went to Baylor,” Gary joked. 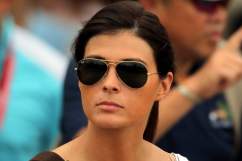