JJ Watt’s fiancee, Kealia Ohai, is not on the USWNT World Cup roster. Ohai had played for the USWNT leading up to the team’s trip to France but did not make the team’s final roster, per The Comeback.

Ohai plays in the NWSL for the Houston Dash which is the only team not to have a player on the USWNT roster, per The Comeback. Back in April, Ohai admitted she wanted to be part of the team, but was also focused on leading the Dash to wins.

“My goal this year is to be the leading scorer in the league,” Ohai told American Soccer Now. “I want to get back with the national team, but I can’t control that, or who they pick. What I can control is scoring goals and [getting] assists. That’s my focus. As a forward, I have to produce. That’s [my] No. 1 job.”

Ohai still has some work to do to become the NWSL’s top scorer as the forward only has one goal. Ohai played for the University of North Carolina and was drafted by the Dash in 2014.

Kealia & JJ Got Engaged in May

Still can’t believe I get to be with you forever. I love you @jjwatt

Ohai may not be playing in the World Cup, but it has not been all bad news. The couple got engaged in May and took to social media to show off the picturesque moment.

“Still can’t believe I get to be with you forever. I love you @jjwatt,” Ohai posted on Instagram.

According to People, the couple met through Watt’s former teammate Brian Cushing who is married to Ohai’s sister, Megan Ohai Cushing. Ohai and Watt are believed to have started dating in 2016 but did not go public with their relationship until much later, per People.

“There’s a little bit of that cat and mouse game where everyone wants a photo of us and wants us to confirm it,” Watt told People. “And I was like, all right, I’ll do it so now we can enjoy ourselves and live happily. And it’s been great.”

Ohai sent out a lengthy birthday wish to Watt back in March. The soccer player emphasized how much she enjoys spending time with her future husband.

“Happy birthday Justin James! I love every minute I get to spend with you. You’re the only person I can laugh with at 5 am cleaning up piles of dog poop off our bathroom floor? I am so proud of you and can’t wait to see what you accomplish this year. I love you babe❤️? @JJWatt,” Ohai tweeted.

It is no surprise that the two are competitive given they are pro athletes. Watt admitted things can get a little intense, but it is all in good fun.

“We’re very competitive,” Watt explained to People. “Very, very competitive and we like to workout together. She’s much faster than me, [while] I’m slightly stronger. We have a lot of fun together.” 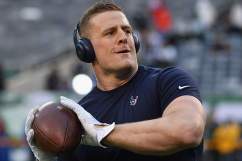