Kawhi Leonard is rumored to be the father of a new baby who was allegedly born in Canada in early 2019, per Narcity. While Leonard has not commented on the rumor publicly, if true, it would mark Leonard’s second child with his girlfriend, Kishele Shipley.

Some Raptors fans are hoping the news is true as it would mean Leonard’s child is Canadian, as Toronto supporters look for any additional reasons for the All-Star to re-sign with the team in free agency. Narcity.com detailed the rumors about the latest addition to the Leonard family.

Multiple sources say that over the weekend, Kawhi Leonard and his girlfriend Kishele Shipley were seen at Toronto’s Mount Sinai Hospital, where they reportedly welcomed their second child, a baby boy, into the world. For those of you wondering, this would mean that Leonard’s alleged newborn son is a Canadian citizen, as those born in Canada are automatically granted the opportunity for citizenship, according to the Government of Canada. The prospect has many Raptors fans overjoyed.

The news outlet 6ix Buzz TV also discussed the rumors on Twitter back in March.

Narcity reported in April that the news “has not been confirmed” so it is important to approach the rumors with a good degree of skepticism.

As of right now, no confirmation of the exciting news has been made by Kawhi Leonard or his partner, Kishele Shipley. The news itself has not been confirmed by a verified source, but Raptors fans are in full “believe” mode. We hope we get to congratulate Leonard when he returns to the court!

It is important to note that Leonard has not confirmed the recent rumors of a new baby. Leonard has only gone on record regarding the birth of his first child. Leonard spoke about fatherhood in a 2016 interview with ESPN.

Off the court, Leonard’s role has changed, too, as his fiancée gave birth to a daughter.

“It’s just a great feeling, once you have a child,” Leonard said.

Given Leonard’s preference to keep his family life private, fans are unlikely to know if the rumors of the couple’s second child are accurate until much later on down the road.

As Twitter user @TheRenderNHL pointed out, Shipley was believed to have been with some of the Raptors players’ wives during Game 4 of the NBA finals. The above clip from the TSN broadcast shows the significant others chanting “Let’s Go Raptors” during the game.

Some fans have criticized Leonard for lacking a personality, but it is something New Balance has used to their advantage. The shoe company, who Leonard signed with after being traded to the Raptors, has created a whole marketing campaign around Leonard being a “Fun Guy.” Patrick Cassidy, New Balance’s global director of consumer marketing, spoke with Yahoo Finance about the partnership.

“We wanted somebody who had a creative vision, who wanted to be engaged and almost be an entrepreneur and help build this category for us,” Cassidy told Yahoo Finance. “We were looking for a true independent thinker in a sea of sameness. He’s one of the best – if not the best – players in the world. Who better to validate our basketball performance and credibility than a guy like that?” 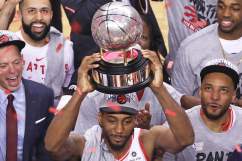 Kawhi Leonard’s Dad Cause of Death: How Did Mark Leonard Die?

Read More
Basketball, NBA, NBA Finals, Toronto Raptors
Kawhi Leonard is known to be the father of one child, but the latest rumors speculate that the couple could have a new baby born in Canada.