Kawhi Leonard is not believed to have a wife, but is in a relationship with long-term girlfriend Kishele Shipley. While there have been rumors that the couple secretly got married, Leonard has not publicly confirmed their marital status. ESPN referred to Shipley as Leonard’s fiancee back in 2016 when discussing the birth of the couple’s daughter.

Off the court, Leonard’s role has changed, too, as his fiancée gave birth to a daughter.

“It’s just a great feeling, once you have a child,” Leonard said.

Leonard is fiercely private as both the Raptors star and Shipley prefer to stay away from social media. Shipley was seen in the stands during Game 4 of the NBA finals. She was spotted wearing a Leonard jersey sitting with the significant others of Raptors players. During the TSN broadcast, the group was seen chanting “Let’s Go Raptors” as Toronto was on the verge of going up in the series 3-1.

There are very few photos of Leonard’s girlfriend with the exception of a few posted by Terez Owens.

Despite their best efforts, Leonard and Shipley made headlines during the season when rumors circulated that the couple welcomed their second child to the world. The interesting subplot centers around reports suggesting that the birth happened at a Toronto hospital which would make the baby a Canadian citizen, per Narcity.

Multiple sources say that over the weekend, Kawhi Leonard and his girlfriend Kishele Shipley were seen at Toronto’s Mount Sinai Hospital, where they reportedly welcomed their second child, a baby boy, into the world. For those of you wondering, this would mean that Leonard’s alleged newborn son is a Canadian citizen, as those born in Canada are automatically granted the opportunity for citizenship, according to the Government of Canada. The prospect has many Raptors fans overjoyed.

With Leonard about to hit the free agent market, Raptors fans are hoping the rumors are true as it could be an added point in the positive category for Toronto as they try to retain the All-Star forward. It is important to note that Leonard has not confirmed these rumors. The only thing that is known for sure it the daughter Leonard discussed in the 2016 ESPN interview. The couple is believed to have met in college at San Diego State.

Leonard has a close inner circle that includes several members of his family. While Leonard was in high school, the family had to overcome tragedy when Leonard’s dad, Mark Leonard, was murdered. Leonard’s uncle Dennis Robertson has become an integral part of Leonard’s life since the death of his father.

“Our family has always been close,” Robertson told the San Antonio Express-News. “It didn’t change the way I looked at things. I was happy to be there so my sister wouldn’t have to go through that process.” 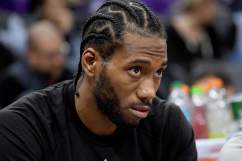 Read More
Basketball, NBA, NBA Finals, Toronto Raptors, WAGs
Kawhi Leonard is not believed to have a wife but is in a relationship with long-time girlfriend Kishele Shipley. Learn more about Leonard's life off the court.