Getty LeBron James and Anthony Davis are unlikely to be paired with many rookies next season as the Lakers are without draft picks.

The Los Angeles Lakers do not have any picks in the 2019 NBA draft unless they make a trade on draft night to acquire selections. L.A. had the No. 4 pick but traded it to the Pelicans as part of the Anthony Davis trade. The Lakers also sent their second-round pick (No. 41) to the Hawks as part of a prior trade. The Lakers acquired the No. 46 pick from the Orlando Magic and selected Iowa State swingman Talen Horton-Tucker.

“Lakers are aggressively pursuing the purchase of second-round picks in Thursday’s NBA Draft too, league sources tell ESPN. Those picks will offer two important things for LA: acquisition of inexpensive labor and ability to exceed the salary cap with those minimum contracts,” Wojnarowski tweeted.

The Lakers are in win-now mode and will be sending two future picks to the Pelicans as part of the Davis deal. According to NBA.com, the Lakers owe the Pelicans two more first round picks and the right to swap selections in the 2023 draft.

Multiple reports added that the Pelicans’ total haul of draft picks includes: this year’s No. 4 overall selection, a top-eight protected pick in 2021 (which becomes unprotected in 2022 if it does not convey), the right to swap first-round picks with the Lakers in 2023, and an unprotected 2024 first-round pick that New Orleans can defer to 2025.

This means the Lakers will at least retain their 2020 first round draft pick but will lose two more first-round selections by 2025.

The Lakers Are Focused on NBA Free Agency

The Lakers are now focused on NBA free agency but find themselves in a challenging situation after the Davis trade. L.A. does not currently have enough cap space to sign another max player and have limited players available to trade on their roster to try to create more space.

Wojnarowski reported that while the Lakers are looking to clear space, L.A. could end up splitting their remaining money among multiple players rather than signing another superstar. ESPN detailed the Lakers attempt to try to clear more cap space in time for free agency.

The Lakers were engaging additional teams on Tuesday to take on the contracts of three of the remaining five players on the team’s roster — Mo Wagner, Isaac Bonga and Jemerrio Jones — league sources said. Kyle Kuzma and LeBron James are the only other two Lakers remaining on the team’s end-of-season roster.

Part of the challenge for the Lakers is it appears they did not consider the in-depth ramifications the Davis trade would have on free agency. While the Lakers accomplished their goal of landing another star to pair with LeBron James, the trade likely takes them out of the running to sign another All-Star in free agency. 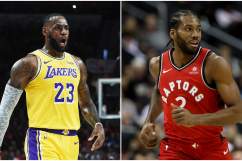