This year’s Champions League final falls during Ramadan leaving Muslim athletes like Mohamed Salah with a difficult decision on whether to break their fast for the title match. Salah has been mostly silent about his plans for this year’s final. According to the Mirror, Salah broke his fast for last year’s final. During a break in the action, Salah was seen drinking water, so we know Salah is not abstaining from it during the match.

Despite some reports that indicate Salah along with Sadio Mane plan to fast, the players have not publicly commented on their plans. If Salah followed last year’s plan, he allowed himself to break his fast for the match. Here is what the 4th Official reported during last year’s match.

#FACTCHECK
Contrary to the reports going around the internet, Liverpool physio confirms Mo Salah won’t be fasting ahead of Champions League final. He said they decided on training camp in Marbella that he would not fast on Friday or matchday.
#LFC
#UCL

Unfortunately, Salah’s day ended early during the 2018 final after he sustained an injury during a collision with Sergio Ramos at the beginning of the match. News will likely trickle out about Salah’s plans right before the Champions League final. NBA player Enes Kanter recently wrote a piece in The Washington Post about fasting for Ramadan during the playoffs.

Like hundreds of millions of Muslims around the world, I ate my pre-fast meal, suhur, which is what we eat before we practice the first of our five daily prayers. Every year, we observe Ramadan for 29 to 30 days based on the lunar calendar. During this time, the most important month of the year for the Islamic faith, followers of my religion abstain from food, water and even medicine until the sun is no longer visible on the horizon. At the end of each day, we break the fast with a light meal called an iftar following the evening call to prayer. Over the years, I’ve become accustomed to the quiet of that morning meal, a time when I devote myself completely to my faith.

Kanter chose to abstain from food and water while the sun was out even on gamedays. Salah and other Muslim players participating in the big Champions League match face a difficult decision.

Prior to the Champions League Final, Liverpool Manager Jurgen Klopp Noted He Supported Players Who Opted to Fast on Matchday

Liverpool manager Jurgen Klopp noted that he supported Salah and other players if they opt to fast on matchday. Klopp explained that his players “offered their best whether they were fasting or not.”

“There is no problem with the fast of my players, I respect their religion, they were always wonderful and they offered the best whether they were fasting or not,” Klopp said, per the Egypt Independent. “There are days when Sadio Mane or Mohamed Salah came into the dressing room because they were praying. In this life, there are many things more important than football.”

Salah has been outspoken about his faith and even celebrates goals by performing sujood. The Conversation’s Asif Majid detailed the significance of Salah’s celebration.

Sujood normally occurs twice in every section of salaat – a word commonly mistranslated as prayer (following its Arabic root, salaat is better translated as “connection”). A Muslim who performs salaat the requisite five times daily finds themself in sujood 34 times each day. In Islamic thought, sujood is perceived of as the physically lowest, but spiritually highest, position a person can take. Salah’s performance of sujood outside of salaat, then, is a specific expression of gratitude for goals scored. 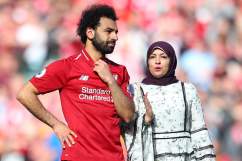