Nate Lashley won his first PGA tournament at the 2019 Rocket Mortgage Classic, and it is the tragedy of losing his parents along with his girlfriend in a plane crash that makes the victory even more significant. Lashley’s parents, Rod and Char Lashley along with his girlfriend, Leslie Hofmeister, were coming back from watching the golfer play in a 2004 college tournament when the plane crashed in Wyoming and the trio went missing for three days, per ESPN.

CBS showed Lashley’s current girlfriend, Ashley, during the Rocket Mortgage Classic. There are very few details known about their relationship, but it is exciting to see Lashley is happy given the 2004 tragedy.

The Casper Star-Tribune detailed how inclement weather likely played a role in the crash and had an impact on authorities being able to locate the plane.

“The weather is making it very difficult today with the wind and snow,” sheriff’s Sgt. Jerry Evagelatos said. “It’s snowing real hard and the wind is blowing in excess of 50 mph.”

The plane disappeared from radar south of Dubois on Sunday. Rod Lashley was apparently trying to reach Riverton, about 68 miles to the south, to sit out a spell of bad weather, Good said.

Lashley attended the University of Arizona and returned to Tuscon after the 2004 West Regional, per Golf Digest. His parents and girlfriend were heading to their hometown of Scottsbluff, Nebraska. Rod was a pilot in addition to being a used car salesman and was driving the plane involved in the crash.

Nate Lashley Was Flipping Houses Before Returning to Golf

Lashley is just in his second year on the PGA Tour at the age of 36. The plane crash had a profound impact on his life and his play on the course. Lashley was involved in real estate before returning to his love of golf. According to ESPN, Lashley quit the sport when he turned 30.

“I always thought I was good enough, but mentally I was holding myself back,” Lashley told ESPN. “Especially for the first few years after the crash, it just always felt like something bad was going to happen. It took a long time to get over that.”

Pebble Beach can be an amazing place but when the weather changes it can get bad fast. Tough week but onto the next. Thanks for the support. #ping #diamondresorts #titleist #footjoy

Lashley and Hofmeister had been dating about a year when the golfer invited her to attend the tournament. Lashley admitted that he felt guilty for her death since he had invited Hofmeister to join his parents to watch him play.

“She was great,” Lashley told ESPN in 2017. “She was the nicest person ever…I haven’t really found anyone to compare.”

Lashley and his sister, Brooke Lashley, hoped for the best during the three days their parents were missing. Unfortunately, they received the worst possible news once the crash scene was discovered. As time has passed, the tragedy has helped put golf in perspective for Lashley.

“It puts some perspective because you never know what’s going to happen,” Lashley noted to Golf Digest. “It makes golf a little easier from looking at the perspective that golf isn’t such a big deal.” 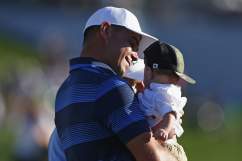