Getty Zion Williamson is expected to be the No. 1 pick in the 2019 NBA draft.

Pelicans GM David Griffin hoped Davis would have a change of heart after New Orleans landed the No. 1 pick, but the All-Star big man had his eyes set on greener pastures. Davis is represented by Klutch Sports founder Rich Paul who played a vocal role in having the big man moved.

Davis demanded a trade early in the 2018-19 season, but the Pelicans opted against moving him at the deadline. Griffin took over this offseason as the new Pelicans GM and will now have to rebuild the team with Williamson as the cornerstone. Here is a look at the current Pelicans roster and projected starting lineup. Keep in mind that this roster will look different after NBA free agency takes place.

Prior to the trade, ESPN’s Adrian Wojnarowski outlined what the Pelicans were seeking in return for Davis.

Griffin is pursuing a combination of assets that include an All-Star player, a young player with All-Star potential and two first-round picks, league sources said. Those wants are on a sliding scale. For example, the better the player, the softer the requests on the draft picks — and vice versa.

These were lofty expectations set out by Griffin likely as a negotiation tactic to get as much as possible in return for Davis. The challenge for the Pelicans is Davis only has a year left on his contract and made it clear that he plans to become a free agent in 2020. Some teams found it challenging to give up a lot of assets for a player that is not committed to staying long term. However, the Pelicans still managed to get a major haul from the Lakers for Davis.

There is a lot to be excited about in New Orleans with Williamson looking like a rare talent that a team can build around. ESPN’s Mike Schmitz refers to Williamson as a point-center meaning the big man can play as a small-ball five while also handling the rock like a guard. Williamson will now be paired with Lonzo Ball and Brandon Ingram to go along with Jrue Holiday. 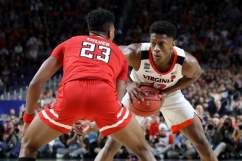