Getty Julius Randle is headed to the New York Knicks.

The New York Knicks have landed Julius Randle in NBA free agency. It is not Randle’s fault, but this is unlikely to be the signing Knicks fans were hoping for heading into free agency. Randle will sign a three-year, $63 million contract with a team-option for the final deal, per Yahoo Sports Chris Haynes.

Randle averaged 21.4 points, 8.7 rebounds and 3.1 assists last season with the Pelicans. Randle will team up with rookie guard RJ Barrett to be the new Knicks duo. Here is a look at the updated Knicks roster and projected starting lineup. Keep in mind the Knicks squad will look different after free agency is completed.

The Knicks opted not to offer Durant a full max contract, per ESPN’s Ramona Shelbourne. The team-option for the third year does have significance. As Heavy discussed heading into free agency, the Knicks could look to pursue Giannis Antetokounmpo in 2021 if they are unable to land a marquee free agent this summer.

With the details of Randle’s deal emerging, we may have our answer on what the Knicks plan to do for the rest of free agency. We can expect the Knicks to sign more players on one or two-year deals. There was talk the Knicks would sign two max players like Durant and Kawhi Leonard. Without Durant, it now looks like the Knicks will turn their attention to other free agents on short-term deals. SNY TV’s Ian Begley reported that the Knicks are also looking at Wayne Ellington and Taj Gibson.

“The Knicks, obviously with a ton of cap space left after the Randle agreement, have interest in Wayne Ellington and veteran Taj Gibson,” Begley tweeted.

RJ Barrett Dreamed of Being a Knicks Fan

The good news is that Barrett dreamed of playing for the Knicks. Barrett spoke with The New York Post about his bucket list heading into the NBA.

“A lot. Rookie of the Year. MVP in the league,” Barrett noted to The New York Post. “Win a championship. Go see the Statue or Liberty. One thing I will have to actually go see is Indochino has something up of me in Times Square, so I’m gonna have to visit that soon.” 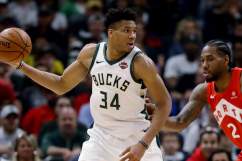