Rory McIlroy and his wife, Erica McIlroy (formerly Erica Stoll) were seated at the “young table” at this year’s U.S. Open Reunion of Champions dinner, per Golf Channel. The couple was seated with Jordan Spieth and his wife, Annie Spieth, along with defending champion Brooks Koepka and girlfriend Jena Sims.

Rory, Jordan and Brooks are far from newcomers to the PGA Tour, but the dinner includes all of the past U.S. Open winners who are still living. This is why the golfers, along with their significant others, were seated at the “young table.”

“It was really cool, just the stories that we were telling,” McIlroy noted to Golf Channel. “We must have stayed about an hour and a half after everyone else had left. We shut the place down, just chatting. It was really, really cool.”

Rory and Erica got married in an Irish castle in 2017 in a star-studded affair. Not only were there a number of golfers present, musicians U2, Coldplay’s Chris Marin, Stevie Wonder and Ed Sheeran were also at the celebration. Wonder and Sheeran were among the performers at the event.

Rory & Erica Met While She Was Working for the PGA Tour

Erica does not enjoy the spotlight that comes with being married to one of the top golfers in the world. Rory was previously dating tennis player Caroline Wozniacki and appreciated that Erica was not a celebrity. The couple met when Erica worked for the PGA Tour. While Erica is frequently at PGA tournaments supporting her husband, don’t expect to see her posting photos to social media as she prefers to keep a low profile.

“The thing I love about it is that we were friends before anything romantic happened,” McIlroy noted to The Independent. “We met when she was working for the PGA of America, and renting a condo in Palm Beach, and I found it refreshing being with someone who was living a normal life rather than, ‘Oh! My jet is 30 minutes late!’”

Rory’s Wife, Erica, Compares the Masters to Being at Disney

GettyRory McIlroy laughs with his wife, Eric Stoll, at the 2018 Masters Par 3 Tournament.

Rory has still yet to win at Augusta, and his wife tried offering him a little bit of perspective on the Masters. Erica compared being at Augusta to vacationing at Disney.

“She put it this; it’s like when you are a kid and you go to Disneyland,” Rory noted to The Guardian. “You think it is the only place in the world. When you are at Augusta that week, it’s the only place in the world. You drink the punch, everyone is wearing their Masters gear. It’s like Disney with your mouse ears. You leave on Sunday night and all of a sudden you snap out of it. The week passed so quickly and you were in a daze because of the whole Augusta thing. You have got to strip that all away. It’s a golf course, it’s a golf tournament.” 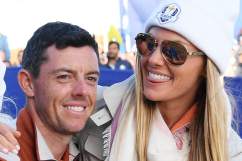 Rory McIlroy & Wife, Erica Stoll, Got Married in a Castle in Front of U2 Members