Tom Brady still has plenty on his fastball. The New England Patriots quarterback will be 42 when the 2019 NFL season kicks off, an age reached by very few active players.

Quarterbacks may have a longer career expectancy than their fellow position players, taking fewer hits and facing less pounding on their muscles and joints. But Brady will be in rare territory if he plays another full 16-game regular season. (And he’s played every game in 15 of the past 17 years.)

As Yahoo Sports’ Shalise Manza Young points out, only Warren Moon has played anything close to a full NFL season at 42 years old. And he appeared in 10 games for the Seattle Seahawks in 1998. Brett Favre played 13 games with the 2010 Minnesota Vikings as a 41-year-old. And Vinny Testaverde was 41 when he played in 16 games (starting 15) for the Dallas Cowboys in 2004.

Care to bet against Brady at this point? He had a strong 2018 season, throwing for 4,355 yards and 29 touchdowns. (However, he also threw 11 interceptions, his highest total in the past five seasons.)

The smart money is probably on predicting a decline which seems inevitable, yet Brady has staved off the ravages of time year after year. That’s the stance ESPN’s Max Kellerman is taking, predicting that Brady will “fall off a cliff” and soon become a “bum.” (Yet he concedes that Brady is “clutch” and “the best of all time.”)

Evidently, Brady heard about Kellerman’s doubts and addressed them in an Instagram story. Posting a photo of a Pocket Radar device that clocked one of his throws at 61 MPH, Brady added the text “He’s gonna fall off a cliff” along with a thinking-face emoji. 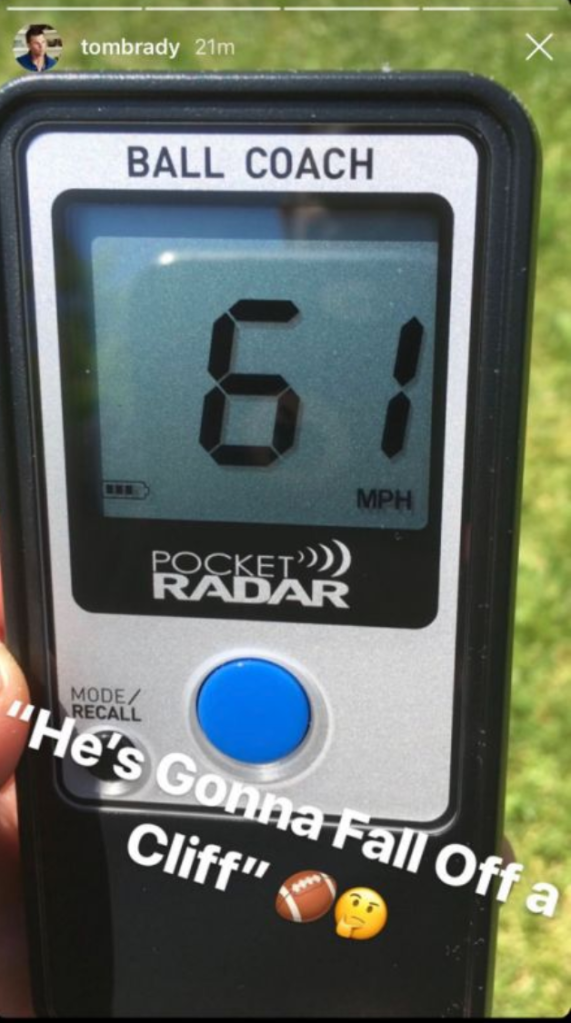 For context with that 61 MPH number, Kansas City Chiefs quarterback phenom Patrick Mahomes was clocked at 62 MPH leading up to the 2017 NFL Draft.

How Fast Can Patrick Mahomes Throw the Football?2017 NFL Draft Prospect Patrick Mahomes shows off his rare throwing strength, as he and former quarterback David Carr square off to see who can throw a football the fastest. Subscribe to NFL: j.mp/1L0bVBu Start your free trial of NFL Game Pass: nfl.com/gamepass?campaign=sp-nf-gd-ot-yt-3000342 Sign up for Fantasy Football! nfl.com/fantasyfootball The NFL YouTube channel is your…2017-04-19T00:30:57.000Z

Considering that Brady used Kellerman’s own words, it’s reasonable to assume that the image was directed squarely at the First Take co-host. Did the quarterback hit the target, as he does so often on the football field? (Brady completed 65.8 percent of his passes last season, by the way.)

Eventually, Kellerman could be right. Maybe. Brady could indeed experience a significant decline. But he could also retire before that happens and never reach “the cliff” that Kellerman says has been looming for the past three years.

Brady is under contract through this season and will almost certainly sign an extension for one more year after that. He likely doesn’t plan on doing anything that will make Kellerman’s prediction come true. Maybe he’ll address NBC’s Chris Simms ranking him ninth among NFL quarterbacks next.