The Toronto Raptors are bound for a championship parade after winning their first NBA title. The parade will be Monday, June 17, per multiple reports.

Watch all the festivities on Sportsnet. @Raptors | #WeTheNorth pic.twitter.com/QKRCmdhhYX

A photo was posted on Twitter prior to NBA Finals Game 6 suggesting the parade would be on Monday, June 17, and it turned out to be accurate.

NJ.com reported that the parade will be at 10 a.m. on June 17 in downtown Toronto. The parade route will likely tie into Jurassic Park, the epic area where fans watch games outside the arena. Toronto mayor John Tory released a statement to Raptors fans but only noted that “we will celebrate our Raptors in the days ahead.”

Thank you to all Raptors fans for their passion and their very ‘Toronto’ behaviour at Jurassic Park night after night, home game or not.

We will celebrate our Raptors in the days ahead but in the meantime one simple heartfelt, ‘THANK YOU!!’ to a team that has brought us the joy of a championship and which brought a great city and a great country together.

The City of Toronto has yet to announce the parade date but did send out a brief tweet after the Raptors clinched the title.

Credit to Raptors president Masai Ujiri for taking the necessary changes to build Toronto into a contender. Ujiri traded DeMar DeRozan for Kawhi Leonard with no assurance that he would re-sign this summer. Ujiri also made a midseason move to acquire Marc Gasol who played valuable minutes during the postseason. SB Nation provided a great overview of how the Raptors won an NBA title that few expected.

Siakam turned into a near All-Star and the Most Improved Player over the previous summer. Lowry turned into a Kiddian playmaker and coach on the floor. Danny Green re-entered his proper context (defender and gunner for an outside-in team). Ibaka refused to stop trying to build a strong team culture and make an impact wherever he was in the rotation. The Raptors Bench faith was decimated, but VanVleet kept the faith alive. Ujiri added Marc Gasol, whose very Gasolian nature has made the Raptors offense prettier and the defense more stout.

After the Raptors enjoy their championship parade, it will be an interesting offseason for the franchise. All-Star Kawhi Leonard is a free agent and president Masai Ujiri appears to be in hot pursuit by the Washington WIzards. If the Raptors can re-sign Leonard, the Raptors will once again be one of the title favorites heading into next season. 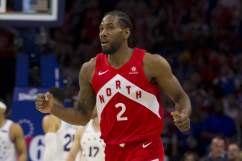